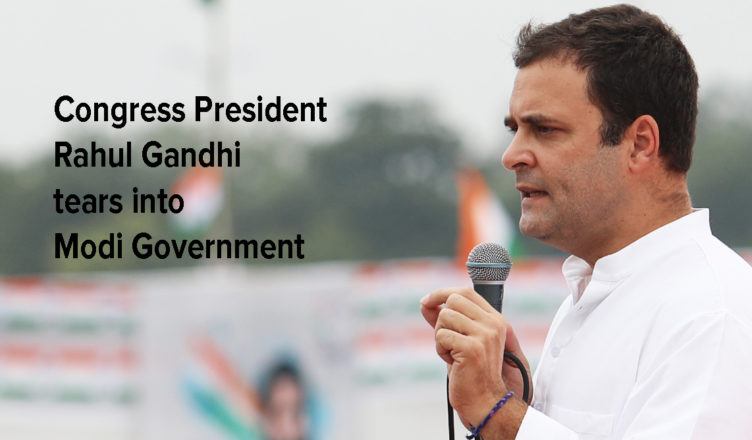 While delivering his first speech after becoming the Congress president, Rahul Gandhi proved that he is not going to take things lightly anymore.

Tearing into the Modi Government, Gandhi hit out at the one-sided development of the BJP which has only benefitted 4-5 Modi’s capitalist friends.

“In these 22 years, only one-sided development took place and 4-5 people benefitted,” he said.

Exhibiting confidence, Gandhi said the Congress is sure of its victory in the Gujarat elections and that their government will focus on balanced development.

“PM Modi is nervous. Even the BJP people feels our dominance this time,” he said.

He further said that PM Modi has stopped talking about ‘vikas’ in his rallies. Also, that one does not find PM Modi talking about corruption now.

“Gujarat has understood that Modi ji, Rupani ji are hollow,” he further said.

Gandhi also assured that Congress’ focus in Gujarat would be balanced development.

“In the past three months, Congress has only tried to give vision to Gujarat – Education vision, Healthcare vision and Jobs vision,” he said.

The second phase of the Gujarat Elections is to take place on December 14.

The result will be announced on December 18.