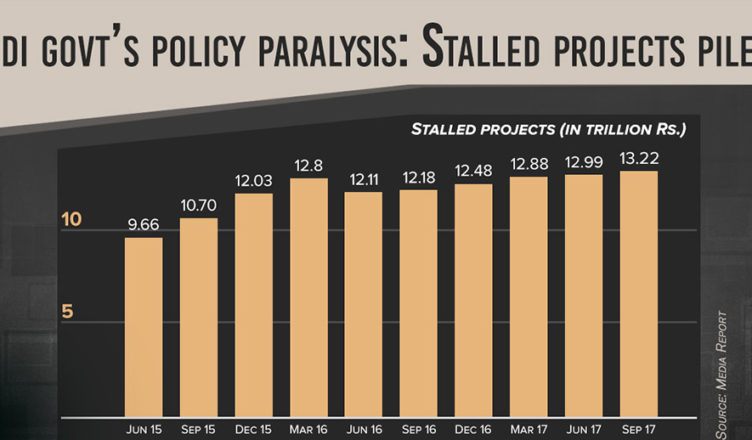 As Narendra Modi would often hit out at the Congress-led UPA Government claiming that a “policy paralysis” had hampered the growth of industry in the country, he would often make bunch of promises to us regarding fast-tracking of projects and creating an environment of “trust and leadership.”

However, three years into his term, Modi’s words sound so hollow now. Data from the Centre for Monitoring Indian Economy (CMIE) shows that the value of stalled infrastructure projects in the quarter ended September has increased to a whopping Rs. 13.22 trillion. This is the fifth quarter for which the number has shown an increase. This effectively means that 13% of the total projects under implementation are stuck behind the proverbial red tape.

However, if one goes by Finance Minister Arun Jaitley’s statements, it seems Jaitley has been living in a Utopia of his own. Jaitley recently claimed that there is no policy paralysis under his government, however, the numbers clearly tell a different story.

The numbers come at a time when the Modi Government is already facing flak for what it done to the Indian Economy. With the completely unnecessary demonetisation move and an ill-conceived GST, this government’s ease of doing business” rhetoric only translates to reality for selected business groups.

It is time Mr. Modi woke up from his slumber and took concrete steps to jolt his government out of the policy paralysis it is in.