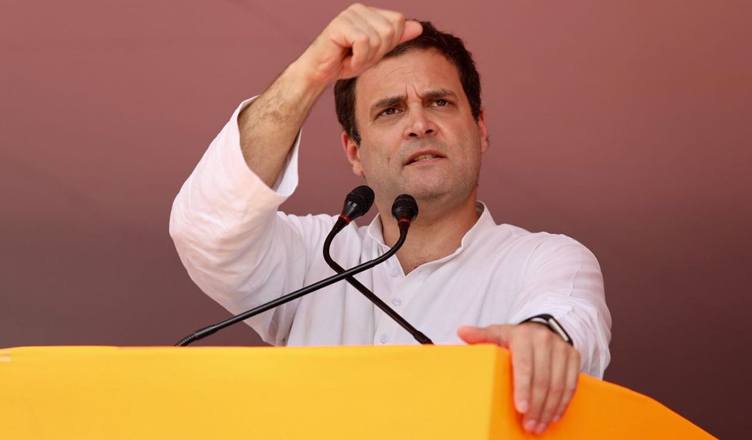 Hitting out at Prime Minister Narendra Modi over his callousness towards the farmers across the country, Congress president Rahul Gandhi on Thursday said that the former considers the farmers in Chhattisgarh a burden. “Modi ji considers Chhattisgarh farmer, Indian farmer a burden. He feels if the farmer is unable to do anything, he can get that thing imported,” Gandhi said while a Kisan-Adivasi rally at Surguja in Chhattisgarh’s Sitapur.

Slamming the Modi government over its inefficiency to waive farmers’ loans, Gandhi said that the Congress gave the farmers the Land Acquisition Act which safeguarded the interests of the farmers as their land cannot be grabbed against their will. He also took the occasion for pointing out the government’s friendly nature towards likes of Mallya, Lalit and Nirav Modi who fled the country after defaulting loans worth rupees thousand crores.

“If loans worth 2.5 lakh crores owed by 15 people can be foregone, the loan of all farmers of India can be waived. When farmers approached the UPA Government, we gave them the Land Acquisition Act which safeguarded the interests of the farmers as their land cannot be grabbed against their will,” Gandhi said.

The Congress president also highlighted some pressing issues such as farmer suicides, unemployment, Dalit atrocities and how the government was doing nothing to resolve them. “The UPA used to increase Minimum Support Price (MSP) by 15 percent every year but Modi ji didn’t even increase MSP by even 5 percent,” he said.

While concluding, the Congress president asserted that his party would change the life of the farmer in Chhattisgarh in five years.  “The Congress Party shall safeguard your rights and interests as farmers. Chhattisgarh needs a government that has a place for farmers, Adivasis and Dalits in their hearts,” he said.

Rahul Gandhi is on a two-day visit to Chhattisgarh to help gear up the party machinery and attend the 25th anniversary celebration of the constitutional amendment of Panchayati Raj institutions.