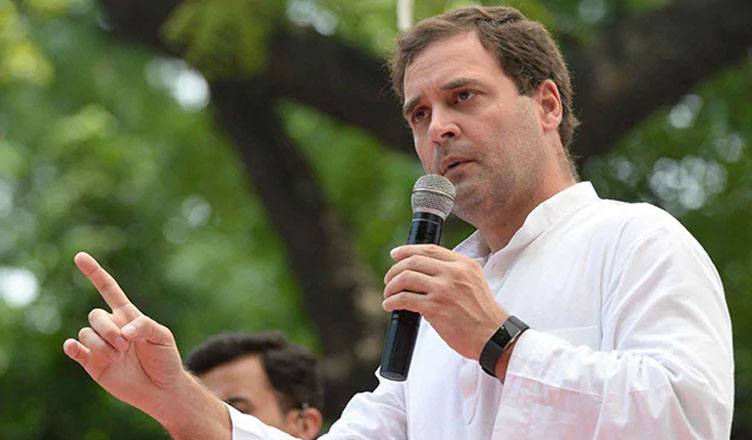 A day after news surfaced regarding former French President Francois Hollande’s remarks that the Indian Government proposed the name of Reliance Defence to be chosen as the offset partner in the Rafale deal, Congress President Rahul Gandhi on Saturday launched a scathing attack on the Centre saying that Prime Minister Narendra Modi and Anil Ambani jointly carried out 130 thousand crore surgical strike on defence forces.

“The PM and Anil Ambani jointly carried out a One Hundred & Thirty Thousand Crore, SURGICAL STRIKE on the Indian Defence forces. Modi Ji you dishonoured the blood of our martyred soldiers. Shame on you. You betrayed India’s soul. #Rafale,” Gandhi tweeted.

The PM and Anil Ambani jointly carried out a One Hundred & Thirty Thousand Crore, SURGICAL STRIKE on the Indian Defence forces. Modi Ji you dishonoured the blood of our martyred soldiers. Shame on you. You betrayed India's soul. #Rafale

Yesterday, news regarding Hollande saying it was the Indian Government that proposed the name of Anil Ambani’s Reliance Defence to be chosen as the offset partner of Dassault in the Rafale deal and that they had no say in it surfaced

Soon after the news, Gandhi scion took to Twitter and slammed PM Modi for betraying India and dishonouring the blood of Indian soldiers.

“The PM personally negotiated & changed the #Rafale deal behind closed doors. Thanks to François Hollande, we now know he personally delivered a deal worth billions of dollars to a bankrupt Anil Ambani. The PM has betrayed India. He has dishonoured the blood of our soldiers,” he tweeted.

Hollande’s statement stands contradictory to the Indian government’s claim that the government had nothing to do with it as the deal between Dassault and Reliance was a commercial pact between two private parties.

The Ministry of Defence yesterday, took to Twitter and reiterated its stand of neither the Government of India nor the French Government having any say in the commercial decision.

“The report referring to fmr French president Mr. Hollande’s statement that GOI insisted upon a particular firm as offset partner for the Dassault Aviation in Rafale is being verified. It is reiterated that neither GoI nor French Govt had any say in the commercial decision,” it said.

The statement of Hollande has blown the lid off corruption that surrounds the Rafale deal. It has left the Indian Government embarrassed and have vindicated the Congress’ claim of Rafale deal being a scam.