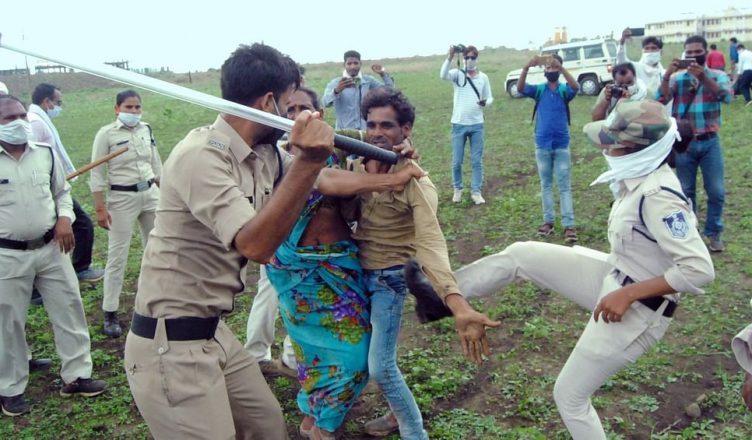 The visuals of a farmer couple being brutally beaten up by the police in the presence of the civil administration in Guna district brought back the memories of Mandsaur where the BJP government a few years ago had fired upon agitating farmers, killing 6 people. The highhandedness and lack of sensitivity of the police is so deplorable that they pushed aside and even abused the wailing children of the farmer-couple who had to witness their parents’ suicide attempt and the subsequent “humanitarian rescue” of the police who rained blows on them. The couple was farming on encroached land—by a local gangster—who had taken money from the farmers. The administration had come to evict them and had destroyed their crop which led the couple to consume pesticide in their presence. Rather than taking action on the gangster who encroached on the land and ensuring justice for the farmers who were duped by him, the police chose to attack the farmers who belong to a vulnerable Dalit community.

The BJP administration is washing off its hands by scapegoating the district administration, but if truly was sensitive, it would not file cases on the distressed couple, which amongst other sections include section 309, which is the ‘attempt to commit suicide’. This is not only inhuman but also illegal under the Mental Healthcare Act of 2017, but the BJP wouldn’t let their conscience, let alone legalities, come in the way of their intent to intimidate. Even during the Mandsaur agitation, rather than listening to the grievances of the farmers, the BJP chose to come down with a very heavy hand. After people’s lives were lost, the government filed cases against hundreds of agitators, instead of understanding their plight and alleviating their sufferings.

Very often vulnerable communities are targeted and exploited by the upper castes. While the BJP regularly sings hollow praises for the farmers, its actions reek of deep disdain for the sections of society that are the most vulnerable and require government support. With violence being resorted to and in several instances where people have taken law into their own hands, India has the ignominy of institutionalizing atrocities against the poorer sections of society.

In order to check the rising crimes against women and children—who often bear the brunt of the violence and exploitation—the Kamal Nath Singh led Congress government had met the Union Home Minister Amit Shah and sought ₹800 crore as a grant. It was however not received. Further, after the Congress government was brought down by unfair means, the BJP is continuing its disdain for farmers and also for the Dalit communities. The disdain for inclusiveness and social justice is becoming the hallmark of the BJP.

After a brief respite from an authoritative government, Madhya Pradesh is once again under the clutches of an insensitive and arrogant BJP. In fact, the Union government waited until the Congress government at the state was brought down, before it finally accepted that there was a pandemic that India had to deal with. And for a long time, the BJP did not have a cabinet even as Covid-19 brought the country to a halt. When Chief Minister Shivraj Singh Chauhan finally announced his cabinet, those belonging to the Congress turncoat leader Jyotiraditya Scindia’s team got the lion’s share with over 41% of the cabinet berths. This only proves that the BJP’s only concern is to grab hold onto power even using foul means. In the process, if atrocities are committed and lives are lost, it views it as mere collateral damage.