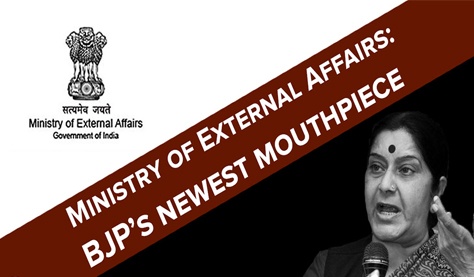 The BJP has not even spared the Ministry of External Affairs, which is the government agency responsible for conducting the foreign relations of India.

On September 22, 2017, a few days before the birth anniversary of RSS ideologue Deendayal Upadhyaya, the Ministry of External Affairs uploaded an e-book with the title ‘Integral Humanism’ on the homepage of its official website. Besides being shabbily put together, the book reeks of propaganda.

The book perverts independent India’s early political history and shockingly describes the BJP as the only political alternative for the country. The introduction also distorts the reality of the first three parliaments when it asserts that the Bhartiya Jan Sangh “emerged as a strong Opposition in the first three Lok Sabha elections”. In the elections of 1951-2, 1957 and 1962, the Jan Sangh won a pitiful 4, 4 and 14 seats respectively.

It is to be noted that despite having seats, Upadhyaya himself was never elected to the Parliament or even any State Assembly. He was not a leading figure in the Indian Independence movement either.

It is definitely not the MEA’s job to declare which political party is the political alternative of the country. The BJP is using government bodies for spreading political propaganda. It can distribute as much propaganda as it wants, but must keep the MEA out of it.

What is even more appalling is External Affairs Minister Sushma Swaraj describing the e-book as the product of the “hard work of the MEA officials”. She also appreciates the MEA officials for unearthing “pearls” from Upadhyaya’s thoughts published in the e-book.

BJP has literally turned the MEA into its mouthpiece.