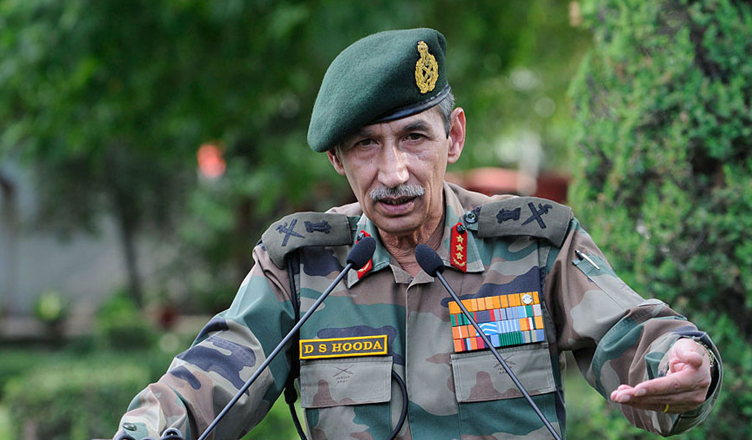 In an interview with The Times of India, Lieutenant General (Retired) DS Hooda said that in 2018, the country lost the maximum number of security force personnel in the last 10 years, adding that there is an internal problem.

Hooda added that the number of local recruits into terror ranks has also increased over the last three to four years.

“The attacks on security forces have increased. Last year we have lost the maximum number of our security force personnel in the last 10 years. So, there is an internal problem. I think we need to look at that very seriously to see how these issues can be resolved,” Hooda told TOI.

While speaking over the recent Pulwama terror attack in which 40 CRPF personnel were killed when an explosive-laden vehicle rammed into their bus and what action should be taken in response to the same, the retired chief of the Northern Command who supervised the 2016 surgical strike said, ” I think the response has to be in all fields: international pressure through other countries, United Nations, and also dealing with China which is blocking the designation of Masood Azhar as a global terrorist. A little more pressure should be put on the Pakistani army because they are the ones who are actually behind the whole terrorism business.”

Hooda further said that the amount of pressure India has put on Pakistan till now has not been consistent.

“You have one cross border operation and nothing sort of changes. So we are seeing an increase in ceasefire violations, infiltration is continuing and (also) cyber-attacks. I don’t think doing one odd operation in two years is going to make them change their behaviour,” he said.

He also spoke on the lapses which led to the deadly Pulwama attack.

“Some basic questions which are being asked are how were they able to get such a huge quantity of explosives? How did they create what appears to be a sophisticated IED? Were all the procedures in place to ensure that civilian vehicles don’t intermingle with CRPF convoys? Yes, there was some kind of lapse, let’s not point fingers,” he said.

One thought on “Maximum number of security force personnel killed in 2018, highest in 10 years; there is an internal problem: Lt Gen (Retd.) DS Hooda”