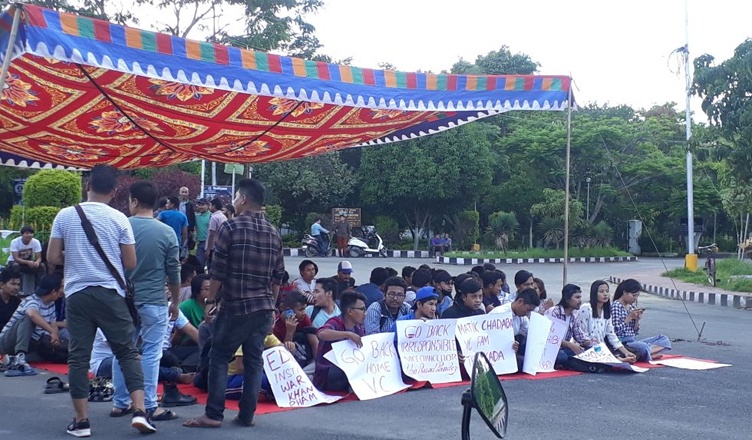 Manipur University vice-chancellor A.P. Pandey has reportedly resumed his duties and has also banned the ‘teachers’ and ‘students’ associations.

Following an inquiry into allegations of negligence and financial irregularities against Pandey, he was asked to go on leave on August 2. However, on August 31, Pandey issued a notification stating he had resumed his duties at the university.

“I returned to Imphal and took charge after my leave was over on August 31. I have informed the MHRD, the governor and the chief secretary of Manipur besides the registrar of the university about my rejoining,” The Hindu quoted him as saying.

On September 1, he issued another notification with regard to his decision of banning the ‘teachers’ and ‘students’ associations. The notification said the Manipur University Act, 2005 “does not provide a provision for existence of employees’ bodies” like the teachers’ and students’ associations. The office order said that both organisations were “directly involved in subversive activities leading to create turmoil in the university.”

Also read: For first time in decade, number of militants crosses 300 in Jammu and Kashmir

“I have banned the MUTA and MUSA because they were instigating students to protest and ruin the atmosphere of the university. They were pushing students towards destruction and destroying the future of so many students.” Pandey told The Indian Express.

Following Pandey’s announcement of resuming his duties at the university, the associations on Sunday said they would resume their protests if this happens.

The teachers’ association said that Pandey would be allowed to enter the campus after the probe against him is completed.

“If by the evening of September 4, there is no response to our demand, we will resume our strike,” the teachers’ association spokesperson, professor N.N. Singh told The Indian Express.

Earlier on May 30, students and teachers had held protests starting May 30 demanding Pandey’s resignation. They argued that the allegations against him made him unfit for the post of vice-chancellor.

Later on August 16, the protestors signed a memorandum with the state government and the Union Ministry of Human Resource Development, which said that Pandey would be on leave until the inquiry was completed and appropriate action taken.