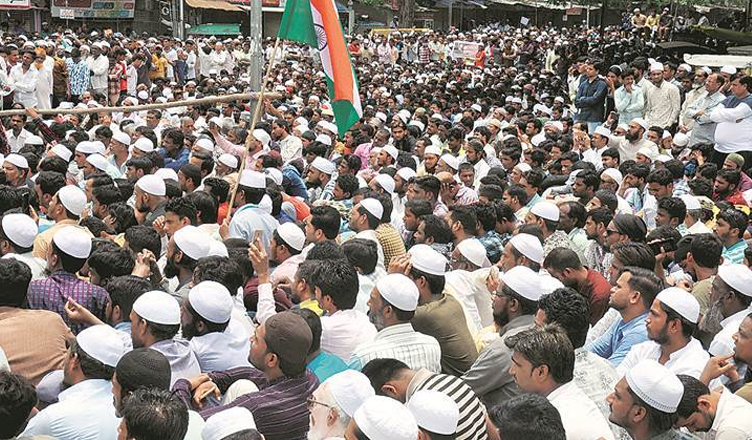 At least 1 lakh people from the Muslim community gathered at the historical site “Shahidon ki Yaadgaar” (martyrs’ memorial) monument in Maharashtra’s Malegaon on Monday to urge the government to form a law against mob lynching.

It was a silent protest called by the NGO, Jamiat Ulema. “We do not seek revenge, and don’t believe in violence. We believe in the rule of law,” The Indian Express quoted clerics of Jamiat Ulema, as saying.

“The issue (mob lynching) has pierced our hearts; there seems to be no end. Ab bardaash ke bhi bahar hai (now it’s unbearable)…. Muslims are unlike other communities. If any other community was the target, they would have responded by now. Largely, the entire faith responds to the elders and clerics,” Maulana Umrain Mahfouz Rahmani, secretary, All-India Muslim Personal Law Board, told The Indian Express.

“We are doing our best and holding them together, convincing them, asking them to show restraint, praying with them. But now even we are being tested. In Pehlu Khan’s case, the way the government machinery behaved was heart-breaking —- in most cases there are no FIRs and then our community has to watch photographs and videos of the lynching; then see the accused being garlanded by ministers..” he further said.

The community has also submitted a letter to the Maharashtra administration in which it has urged the President to write to all state governments and Union Territories about lynchings as well as have demanded a compensation of Rs. 50 lakh to the family of each person who falls prey to mob lynching.