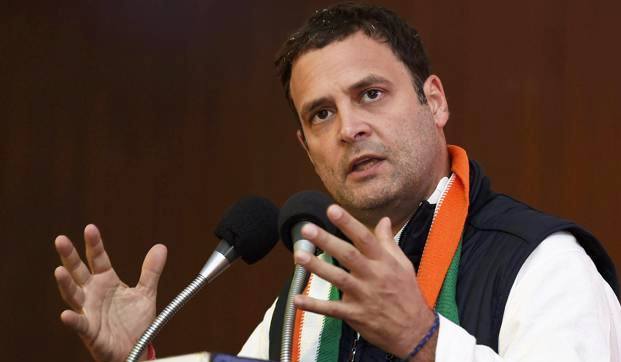 In his first exclusive interview to National Herald after taking over as the Congress President, Rahul Gandhi said he would help the party embark on a path of greater democratisation and bring in interesting faces.

Rahul Gandhi said major changes will be undertaken in the party under his leadership.

Rubbishing BJP’s claims that the Congress fought these elections on casteist lines, the Congress President said that their party brought the OBC, Dalit and the Patidar communities together on one platform.

Here are excerpts from Rahul Gandhi’s interview with the NH and Qaumi Awaz’s Editor-in-Chief Zafar Agha:

National Herald: Congratulations to you on being elected as President of the Congress Party. Thank you for giving this interview, which is the first since your appointment as party head.

Rahul Gandhi: Thank you very much.

National Herald: So, where do you go from here, in the Congress party as well as for the country?

Rahul Gandhi: I liked very much Mr Manmohan Singh’s formulations today, which is the politics of hope versus the politics of fear, or you can say the politics of anger. The BJP has divided the society. And they have created a false animosity between our people. I think Congress party’s role is to create a bridge between our people, start a conversation, where we can once again start to say that we all are Indian. Not a particular class, caste or religion, but our first identity is that of an Indian. And after that, come all other identities. And that is something that the Congress ideology can do.

Zafar Agha: The problem is that Congress’ ideology of secularism and harmony is itself threatened now. There is tremendous fear and insecurity among the people. Isn’t this a great challenge before the country and the Congress?

Rahul Gandhi: Yes, periodically — look at Indian history — this has happened. A sort of polarisation you saw in the 1990s as well. But I primarily think that this country stands together, and we believe very deeply in love and affection. This country does not believe in hatred. And of course there has also been a large organised defamation campaign against the Congress party, carried out by the BJP and the RSS. Very organised, systematic, against its leaders, against its workers, against its ideas, against its past. I really felt this in Gujarat, that certain myths have been created, which are just lies. I mean, in Gujarat, the myth is that Sardar Patel and Jawahar Lal Nehru didn’t get along. It’s a lie. Jawahar Lal Nehru and Sardar Patel were friends. They spent time in jail together. They disagreed on certain things, but they were friends, and Sardar Patel had strong views against the RSS. He had also banned the RSS.

As I said in my talk in the US and also during my campaign speeches in Gujarat, there is a central problem that India is facing, which is, India is simply not producing enough jobs, for the number of youngsters of this country. And, that is creating a certain amount of anger. Over the last three years, you have also crippled the economy. Demonetisation and Gabbar Singh Tax (GST) have really hurt the spine of the Indian economy, small and medium businesses, and imposed a massive tax. So, there is a sense of anger among people. And, you have to go to the foundation, you have to fix problems there, before anger starts to reduce.

Zafar Agha: People say that Congress is not ready organisationally to take on the challenge posed by the RSS-BJP combine. Do you feel this is a problem for Congress?

Zafar Agha: So, your plan is to transform the Congress from bottom upwards?

Rahul Gandhi: Yes. But it is not just my plan, it is the desire within the Congress party to transform, evolve and change itself, and I would try and help to enable that.

National Herald: Will the Congress democratize itself more?

Rahul Gandhi: That is certainly my intention. We have done a lot of work in the Youth Congress and NSUI, and very successful work at that. We would like to bring in as many new faces, young faces, exciting faces and dynamic faces (as we could). That’s not to say that people who are experienced or older should not have space.

There is tremendous talent in the Congress Party. Just look at the present Cabinet. And compare with it the Cabinet of the UPA. Just imagine those names. Compare a Manmohan Singh Ji with Mr. Modi. Compare a Chidambaram to Mr. Arun Jaitley. Tell [me], who can you compare Pranabda with in their government. Tell me, who can be compared with Mr. Antony in their government. So, when you actually look at them, from a policy perspective, it’s not much weight there. You can see it, when you listen to them. I mean, what is being done to India’s foreign policy is an out and out disaster.

National Herald: Talking about Gujarat, Congress had been criticised by the BJP for dividing the people by asking for votes on casteist lines.

Rahul Gandhi: It is strange that we are facing these allegations. Instead of dividing people on caste lines, we have brought leaders from different communities, including Alpesh, Jignesh and Hardik, together.

Wasn’t it the BJP who said that it would fight the Gujarat elections on the OBC issue? They are the ones who pulled out the caste card. They divide the people on caste lines. And they ultimately falsely blame us for creating a caste divide.

It’s like Mahatma Gandhi, Sardar Patel Ji and Jawahar Lal Nehru spending years and years in jail, and Mr. Savarkar basically signing [a] surrender to the British. And then the BJP saying, Gandhi and Patel are their leaders. If you read Patel, you will see he is criticising the RSS. So, it is the propagation of a lie. The truth doesn’t matter to them. There is a very interesting clip, I don’t know whether you have seen it, of Mr. Modi talking about the bullet train where he says, ‘look, it’s not the reality of the train that’s important, it’s the perception of the train that’s important’. So, the reality is of no consequence for these people, the truth has no consequence.

Zafar Agha: The Prime Minister has been criticised for openly preaching politics of hate during the Gujarat polls. Votes were canvassed on regionalism and religion. How do you react to this kind of campaign?

Rahul Gandhi: You could take a look at their track record. They don’t believe in love. They believe in a philosophy guided by hatred. Their leaders have been imbibed with such philosophy for years. Look at the comments made against an ex-Prime Minister.

Zafar Agha: There were allegations against Manmohan Singh that he was conspiring with Pakistan.

Rahul Gandhi: They are attacking the person who has dedicated his entire life for India. He was the one who helped open up the Indian economy in the 90s. He has served as Prime Minister for ten years. And they are targetting him. And why? Just for a few votes and to win the elections. This is their style.

National Herald: You mentioned in your speech about the organised nature of violence these days. You touched upon the issue of lynchings too. Does Congress have enough of determined workers on the ground level? Is Congress’ organisation strong enough? Do you think that Congress is equipped to deal with such a challenge?

Rahul Gandhi: Congress Party is not a static organisation. We are a dynamic and an organic party. We will open Congress’ doors. We will provide the youth of the country with an alternative vision, that’s premised on love and brotherhood. Congress will provide them with a vision. India is faced with two visions. One is the ideology of hate. Three years ago, Indians thought that we could bear with the shortcomings in RSS’ vision for India if they can deliver economic growth. While flaws in RSS’s vision still remain, Indians haven’t benefited a great deal economically either. You tell me. Who has benefited from demonetisation? Who has benefited from the Gabbar Singh Tax? Who has benefited from the collapse in the GDP?

The farmer is now understanding that they haven’t been getting fair prices for their crop. The farmers saw how loans amounting to three to four lakh crores, given to 10-15 people, were forgiven. But when farmers ask for their debt to be forgiven, they are told by Arun Jaitley that it is not government’s policy to forgive farmers’ loans. The anger against the BJP among the people is on the rise.

Yesterday, while I was travelling in Delhi, an auto driver came up to me. He folded his hands and pleaded that Congress party stands up for their rights. He told me how he used to make Rs 50 before, but was now earning only Rs 25. There is bankruptcy in the nation.