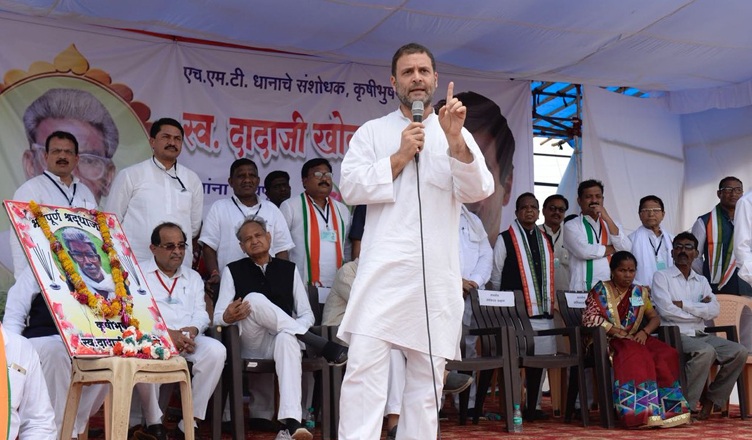 Congress president Rahul Gandhi was in Mumbai yesterday and while interacting with women, youth and farmers at Nanded in Maharashtra’s Chandrapur district, he said that the grand old party would waive agricultural loans if voted to power.

The Gandhi scion said that the Congress would waive agricultural loan if voted to power and would do everything that would benefit the farmer community. “If the Congress comes to power, it will ensure that farmers get their due. The long-term solution lies in creating farm infrastructure — roads, markets, cold storages and food proceedings units — so that farmers can get better price for their produce,” he said.

Stressing on the fact that Bharatiya Janata Party (BJP) is pro-rich and anti-poor, Gandhi said, “The Modi government is dishonest. It only cares for the country’s 15 top industrialists and has provided them with a Rs 2.5-lakh crore corporate loan waiver. It will do nothing for poor farmers”.

Gandhi visited Nanded to pay tributes to Dadaji Khobragade, the farmer who invented the HMT variety of rice. He took to Twitter to inform about the same. “Dadaji Khobragade, a Dalit farmer-scientist,  invented the revolutionary HMT variety of paddy. But, he died largely forgotten and in penury. I visited his home in Nanded, Maharashtra, to condole with his family and to apologise for our apathy as a nation, to his achievements,” he tweeted.

During the interaction, the Gandhi scion said that Modi betrayed both farmers as well as youth by not delivering on promises made by him during the 2014 Lok Sabha elections and that if they are voted to power in 2019, they would provide on both counts.

He said they will ensure a prosperous India by focussing on four fronts – agriculture, health, education, and industry.

Such a promise can be easily believed as the Congress party in Punjab just proved that it does fulfill its promises by announcing Rs. 209 crore relief for 38,000 farmers of the state.