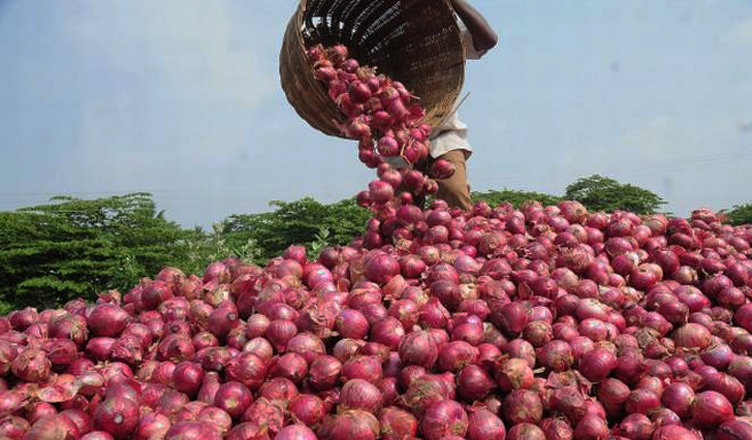 A farmer in Maharashtra had to bear the brunt of bumper production of onion. After spending nearly ₹2 lakh for the onion crop this year, the farmer earned only ₹6 in return for his produce.

In order to mark his protest, he sent the paltry amount to Maharashtra Chief Minister Devendra Fadnavis.

Shreyas Abhale, a farmer from Maharashtra’s Ahmednagar district, had to sell 2,657 kilograms of onions at the rate of ₹1 per kg. Due to bumper production of the crop in the state, farmers have been forced to sell their produce at throwaway prices.

After paying the labour charges and market expenses, Abhale was left with only ₹6.

“I earned ₹2,916 when I brought 2,657 kg of onion to Sangamner wholesale market. After making payment of labour charges and transportation charges at ₹2,910, I was left with just ₹6,” Abhale told news agency PTI.

“I do not know how I am going to clear my dues,” he added.

In another such instance, Sanjay Sethe, an onion grower from Niphad tehsil in Nashik district, had to sell his produce of 750 kg of onion for only ₹1,064.

This means he only got a little over a rupee per kg. The farmer, in a protesting move, sent his earnings to Prime Minister Narendra Modi.

“I produced 750 kg of onion in this season but was offered a rate of Rs 1 per kg at Niphad wholesale market last week. “Finally I could negotiate a deal for ₹ 1.40 per kg and received ₹1,064 for 750 kg. It was painful to see such paltry returns on four months of toil. Hence I have donated ₹1,064 to Disaster Relief Fund of the PMO as a protest. I had to pay additional ₹54 for sending it by money order,” Sathe told PTI.

Low rates of onion in the market is a matter of grave seriousness for farmers in the state. They are facing a very hard time.

It was reported on Sunday that two onion farmers from Nashik district committed suicide due to low prices and indebtedness.

According to The Hindu, the deceased have been identified as Tatyabhau Khairnar, 44, and Manoj Dhondage, 33, and both of them belonged to Baglan taluka in the north Maharashtra district.

Nashik in Maharashtra accounts for 50 per cent of onion production in India.