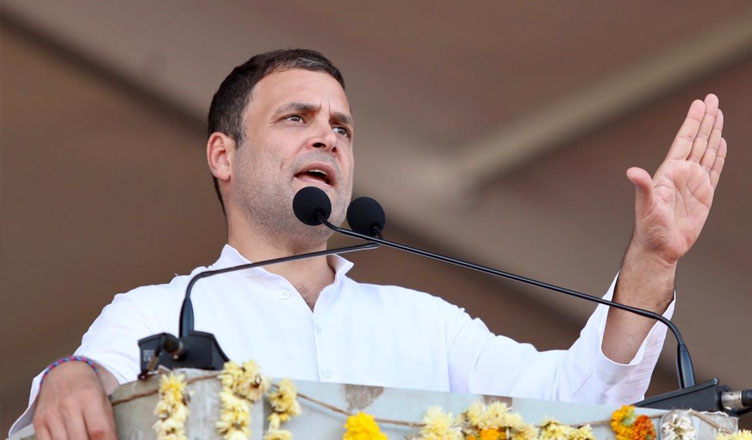 Gandhi further said that KCR had promised to set up a Turmeric board in Nizamabad by mounting pressure on the Centre, but he failed to do so.

“₹3000 crore is allocated to build CM KCR’s house, but no funds are allocated to the Sugar factory in Nizamabad as promised,” Gandhi added.

The Congress chief further said that the people of Telangana trusted CM KCR and chose him in the last elections but now, people have realised that all he did was corruption.

Speaking on the same, the Gandhi scion further said that just like the Centre which changed the amount of one rafale jet from Rs. 526 crore to Rs. 1,650 crore, KCR also changed a Rs. 38,000 crore-project to Rs. 1 lakh crore-project,” he said.

Talking about the dismal state of development of the state, Gandhi said that every family in Telangana has ₹2,80,000 debt on them.

Also read: KCR govt in the state and Modi govt at Centre is about to fall: Rahul Gandhi in Telangana

“Budget allocated for health, education is insufficient but ₹3000 crore is spent in building KCR’s house. Many people of this region work in Gulf countries and help build Telangana. CM KCR said he would allocate ₹5000 crore for people of Telangana working in Gulf, but he failed to fulfil this promise,” he said.

“Only Congress party has the ability to fulfil the promises of Telangana,” he added.

Gandhi further promised to create one lakh jobs in a year if they come to power.

“Today more than 1 lakh government posts are vacant in Telangana. CM KCR has only given 10,000 jobs in last 5 years. Congress CM will work hard to generate 1 lakh jobs in a year,” he said.

Gandhi will next be addressing a rally at Charminar Hyderabad.