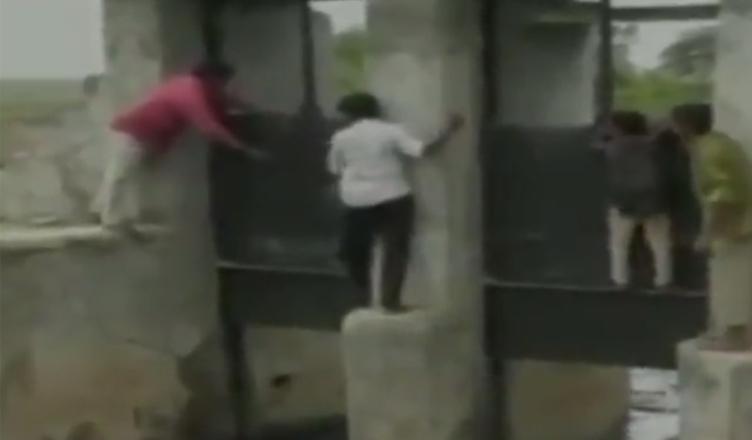 Risking their lives has become a part of the daily routine of residents of two villages in Gujarat’s Kheda district, who cross a bridge every day that collapsed two months ago.

Not only locals, but even school children use the collapsed bridge to reach their school that connects Naika and Bherai villages.

It is more a problem for villagers because no matter what the condition of the bridge be it has to be used by villagers, the bridge being the only way for them to commute.

Locals have been petitioning authorities to rebuild the bridge but to no avail. However, Kheda district collector I.K. Patel has said that reconstruction of the bridge will begin soon.

“If we don’t use this bridge, we will have to travel a distance of 10 km instead of 1 km,” a local told ANI.

Watch the video to see how residents of the village risk their lives every day.

It can be seen in the video how children are being literally transported from one end of the bridge to the other. Thanks to the locals who have been risking their lives to ensure that the kids around attend their school regularly.

It is for sure that Prime Minister Modi does not care for the rural poor. His friends include a bunch of capitalists.

But, it would have been appreciated had he focussed a little extra on his home state Gujarat. After all, he is the one to brag about his state when it comes to elections and rallies. But, just like other states, our Prime Minister and his government have failed Gujarat as well.

It is very easy to say things but very difficult to implement those same things on ground.

All those long talks about Gujarat Model stand exposed. We would only say, “Waah Modi ji Waah!”