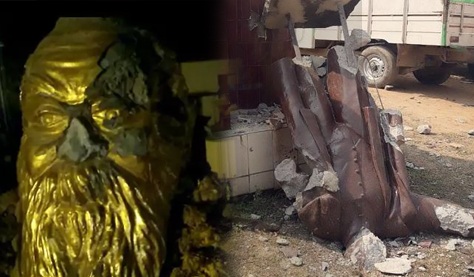 Just a day after a statue of Communist icon and leader Vladimir Lenin was pulled down by Bharatiya Janata Party (BJP) activists in Tripura, a statue of Dravidian icon and social reformer EVR Ramasamy, popularly known as Periyar, was razed in Tamil Nadu’s Vellore.

Pertinently, this news came a few hours after BJP leader H. Raja threatened that, just like Lenin’s statue, Periyar’s statue too would be pulled down. The status was targeted at around 9 p.m. yesterday.

The glasses and nose of Periyar’s status, located inside the Tirupattur corporation office, were damaged. The police arrested two men, out of which one belongs to BJP and the other is a CPI worker. The police also said that both the men were drunk while they committed the act.

The incident of razing status was first reported in Tripura, after the polls declared BJP’s victory in the state, ending the 25-year-long rule of the Left in the north-eastern state. Two statues of Lenin were razed allegedly by BJP workers.

BJP national secretary H. Raja took to Facebook to respond to the outrage. His post said, “Who is Lenin and what is the connection between Lenin and India? What connection has India with Communists? Lenin’s statue has been removed in Tripura. Today it is Lenin’s statue in Tripura, tomorrow it will be the statue of caste fanatic EVR Ramasamy”.

The BJP leader, however, deleted the Facebook post after receiving huge backlash and said that someone else had inadvertently posted it on his page. DMK working president M.K. Stalin has demanded the arrest of the BJP national secretary for his social media post. The MDMK, CPM, and CPI have also demanded to initiate strict action against Raja.

With BJP in power, such things are bound to happen. Their desperation to transform India into ‘Hindu Rashtra’ is evident by such incidents. The secularism of this country, which is the binding force for all, is at risk.