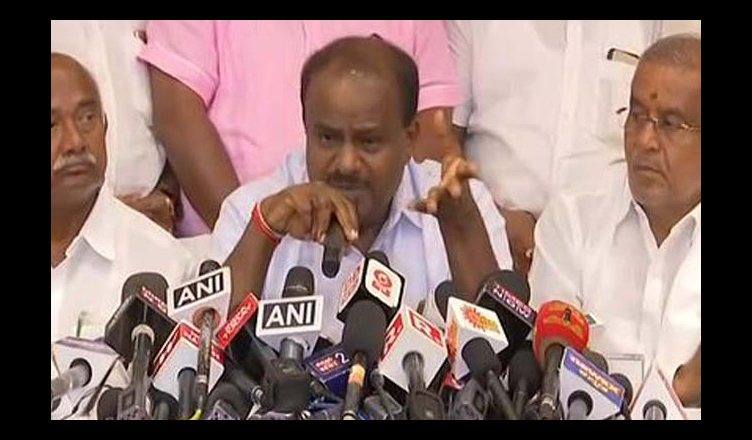 Janata Dal (Secular)’ H.D. Kumaraswamy on Wednesday alleged that the Bharatiya Janata Party (BJP) offered Rs. 100 crore each to his party MLAs as well as cabinet posts so that they could form the government in Karnataka by entering into an alliance with the JD(S). “BJP has promised people in my party 100 crores in cash and cabinet posts… This is the first time that a party has threatened opposition to this level,” Kumaraswamy said while addressing media.

Questioning the saffron party about the large amount of money offered by it, Kumaraswamy said, “Where is this black money coming from? They are supposedly the servers of poor people and they are offering money today. Where are the income tax officials?” While Modi continues to claim to serve the poor and tackle black money, where is the BJP getting the funds worth ₹100 crore each to pay off the MLAs?

Kumaraswamy asserted that no matter whatsoever happens, they would never join hands with the BJP. He said that the BJP is desperate to come to power but he or JD(S) was not power hungry. “BJP has got 104 seats does not mean that Karnataka wants BJP. I have been a chief minister before, I know what that feels like. I want to get to this post again only with voters’ approval. We are not power hungry,” he said.

While extending support to the Congress, the JD(S) leader said that if the BJP tries to hurt them, they would do what they need to get people from BJP’s side to theirs. He also said that the Congress has given him unconditional support and the good understanding that they share would help them run the government in a stable manner. “Karnataka state Congress president and I will meet the governor once again and present him with the numbers,” he said.

Also read: RR Nagar polls to be held on 28th May after seizure of 9,564 voter ID cards

In yet another desperate move, the Modi government has tried to use their muscle and money power to form government in Karnataka through illegal means. The Governor must be pressurised to follow the precedence of Goa, Manipur and Meghalaya. For how long can the BJP use it’s ill-gotten money to arm twist MLAs?