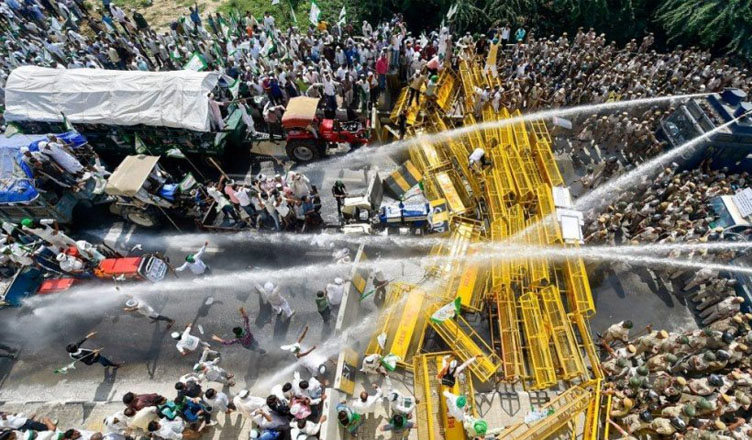 In the wake of over 20,000 farmers protesting against the anti-farmer policies of the Prime Minister Narendra Modi-led NDA Government, Congress President Rahul Gandhi on Tuesday accused the Bharatiya Janata Party (BJP) of brutally beating up farmers on 150th birth anniversary of Mahatma Gandhi, which is also marked as International Day of Non-Violence.

“On October 2 when the world is observing non-violence day, the BJP’s two-year-long festivities for Gandhi Jayanti have started on a violent note. Now, the farmers cannot even come to Delhi to share their woes.”

“On the occasion of Internal Non-Violence Day, the BJP’s two-year-long festivities for Gandhi Jayanti began with the brutal beating of the farmers peacefully coming to Delhi. Now, the farmer cannot even come to Delhi to share their vows,” Gandhi tweeted.

In the latest development, Union Home Minister Rajnath Singh met the representatives of the thousands of Bhartiya Kisan Union (BKU) protesters, and assured to meet most of their demands.

“Home Minister Rajnath Singh met the farmer’s leaders and discussed their demands and have reached an agreement on the majority of the issues. Farmers’ leaders. UP ministers Laxmi Narayan ji, Suresh Rana ji and I will go to meet farmers now,” Minister of State for Agriculture Gajendra Singh Shekhawat said.

Earlier in the day, the protesters were stopped along the Delhi-Uttar Pradesh border.

The farmers have put forward many demands, including the implementation of the Swaminathan Commission’s recommendations for “faster and more inclusive growth” for farmers.

The farmers have also demanded pension for themselves, minimum income for themselves and free electricity for tubewells apart from a few more.

Farmers are a very essential part of our country and they are the ones due to which our stomachs get filled. The BJP government should listen to their grievances and address them at the earliest.