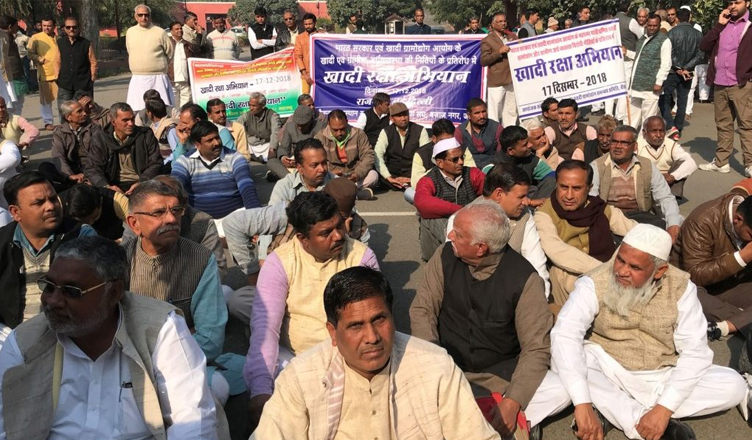 Representatives of khadi artisans from across India assembled at Gandhi Smriti in New Delhi on Monday (December 17) to peacefully protest against the Modi Government and the Khadi And Village Industries Commission’s (KVIC) policies.

Recently, at an election rally in Rajasthan, Modi said that his government had doubled the employment in the khadi industry.

“Eleven lakh people used to be employed in khadi, we have created conditions to increase it to 22 lakh now,” he had said.

However, his government’s own ministry in charge of khadi production, stated in its 2018-18 report that the number of artisans employed at khadi institutions were less than five lakh.

The representatives protesting said that artisans were in fact losing their jobs due to policies such as the use of Direct Benefit Transfer (DBT) to pay fees and mortgaging of property as security.

Spokespersons for khadi producers’ groups said that the khadi industry has seen massive decline in the number of artisans since the time there has been a shift from cash payment to DBT.

They said that many rural artisans, who were earlier paid in cash, now have to get bank accounts opened to access DBT payments and travel long distances to go to bank, due to which many have ended up quitting their job.

This policy has had a major impact on women workers as they are reluctant to go to banks, majorly because of the long distance needed to travel to reach bank.

Khadi Institution representatives also condemned the KVIC policy of demanding mortgaging of property for security and said that they have to mortgage their property even for small loans.

“This is like land grab for bonded labour. We can’t even sell off parts of our property for liquidity to sustain ourselves when they delay payments. KVIC directs us to pay but doesn’t reinvest, so there’s no liquidity for us to function. We can’t even use our property as they have our papers as mortgage,” Bali Ram, secretary of Khadi Gramodyog Samiti in Kurukshetra told The Wire.

Their main demands include loan waiver, payment of dues khadi and village enterprises and amendments in mortgage rules.