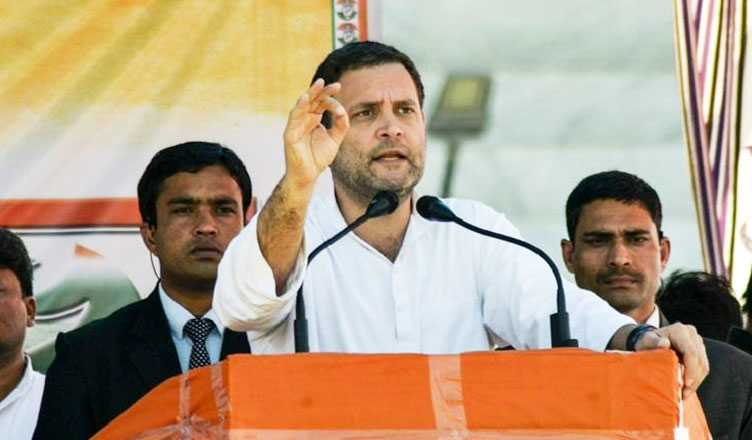 As Rahul Gandhi kicked off the Telangana poll campaign on Saturday, the Congress president said that the Telangana Rashtra Samithi (TRS) government in the state and the National Democratic Alliance (NDA) government at the Centre is about to fall.

“The KCR government in the state and Modi government at the Centre will fall. Congress govt will work hard to provide employment and unemployment allowance of ₹3,000,” Gandhi said while addressing a rally in Telangana’s Nirmal town.

“Today, we remember and honour Komaram Bheem, tribal leader and Dr. Ambedkar. By renaming projects that were named after Dr. Ambedkar, CM of Telangana disrespect him,” he said.

“The project which was made on the name of Dr. Ambedkar was renamed as the Kaleshwaram project,” he said.

He alleged that there is rampant corruption in the KCR government and that when the Congress will come to power, it will work to fulfil the needs of the people of Telangana.

“The project, which was to be built in Rs. 38,000 crore, was changed to Rs. 1 lakh crores. Because the Chief Minister of Telangana indulges in corruption,” he said.

Reminding people of Congress introducing the Land Acquisition bill, Gandhi hit out at the Telangana Chief Minister for not implementing the same in the state.

“Tribal Rights Act & Land Acquisition Act which are not implemented in Telangana will be enforced when Congress comes to power: Congress President @RahulGandhi

Hitting out at both, PM Modi and Rao, the Gandhi scion said that both of them failed to fulfil promises which they made.

“The Telangana Chief Minister had promised to give one job to each family, 3 acre land to SC/ST, 12% reservation to Adivasis but he failed all his promises just like Modi failed his,” he said.

Gandhi further promised that his party will waive off farm loan up to Rs. 2,00,000.

Gandhi will be addressing two more rallies later in the day at Kamareddy and Charminar in Hyderabad.