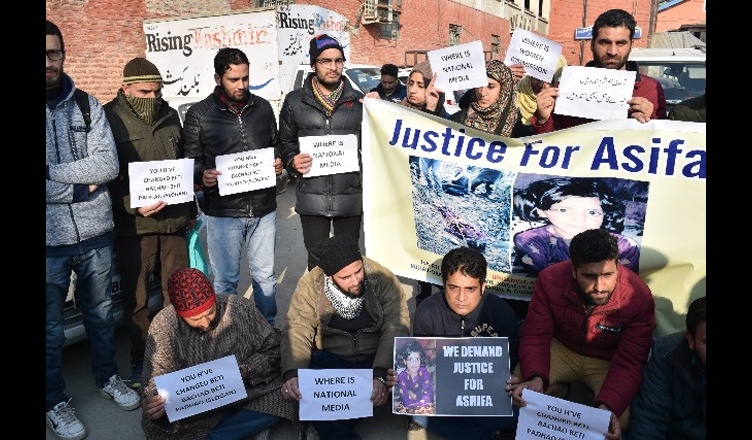 I am numb. Numb, like most Indians, and shocked as any human being should be. The unspeakable ways in which an eight-year-old was brutalised, raped and killed, makes me feel nauseous, every time I think of it. There certainly is a beast latent in us human beings. And all we can do is pray silently for the Asifa’s soul and the many others whose unfortunate murders may not have come to light.

The Kathua rape-murder case frightens and angers me at the same time.

The incident is frightening at so many levels and each person may find something more terrifying than the others. What frightens me the most is that the men wanted to satisfy their lust “one last time” before they killed her. Surely, they must be absolutely devoid of even an iota of empathy. They just saw her as an object. Just an object for the psychopaths. To think that some policemen were complicit in this crime that will forever remain a blemish on India’s conscience, frightens me even more.

A few years ago, I recall reading in the news that the Karnataka Police in association with the UNICEF, pioneered a project to bring about child and gender sensitivity in its personnel. I felt reassured that the rest of the country will follow suit.

Despite such poor credentials it is unimaginable that a man in uniform would rape and abet others to rape a child after kidnapping and drugging her.

At a deeper level, our recruitment processes are archaic, and such people are seldom weeded out at the preliminary stage. They not only make it to the government jobs but also thrive in an ecosystem of sycophancy and political partisanship. Not just our law enforcement, but across all arms of the government, we have insensitive men and women holding powerful post. When vested with authority, rather than use it to alleviate quality of life, the government officers often use it to exploit citizens. Taken to its evil extreme, we have cases like Kathua.

For as long as citizens don’t debate politics feigning ignorance, or claiming that it disgusts them, this culture of abuse by the administration shall continue. For as long as we restrict our politics to building places of worship, or burial grounds, we will have to endure an insensitive government. Citizens must deliberate upon the allocation of resources and the importance of structural reforms to our administrative apparatus.

Our culture permits the use of a Devasthan to confine a kidnapped child, to be repeatedly raped and killed. And our culture permits lawyers and lawmakers to partake violent protests to defend those accused of paedophilia and murder, in the name of nationalism and religious solidarity.

We are becoming insensitive and perhaps slowly deranged. Otherwise, why would the government tell us that the “pink” cover of the Economic Survey is an attempt to enhance women’s emancipation? Why would the PM promote a “selfie with a daughter”, campaign, but continue to keep mum even as “India’s daughters” continue to be stalked, raped, murdered and dismembered?

They know we lack the courage to question them.