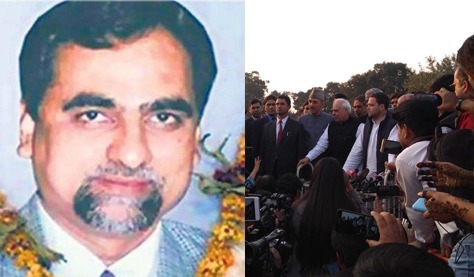 As many as 114 Opposition MPs called on President Ram Nath Kovind on Friday and submitted a memorandum demanding an Special Investigation Team (SIT) probe into the Judge Loya death.

“Judge BH Loya death is suspicious. There have been two other subsequent suspicious deaths. A judge died under suspicious circumstances. It will be an ode to him and his family that the investigation takes place properly,” he added.

The Congress party also released a copy of the memorandum on its Twitter handle.

114 MPs from 15 parties signed the memorandum. His death is suspicious and there have been 2 other suspicious deaths. President gave a positive response: Congress President Rahul Gandhi

“We don’t trust CBI or the NIA. We know what CBI officers do…in the case of Sohrabuddin, CBI didn’t file an appeal. If an independent SIT can be formed for the 2G case which was a commercial issue, then why one cannot be constituted for a probing suspicious death of judge?” Senior Congress leader Kapil Sibal said.