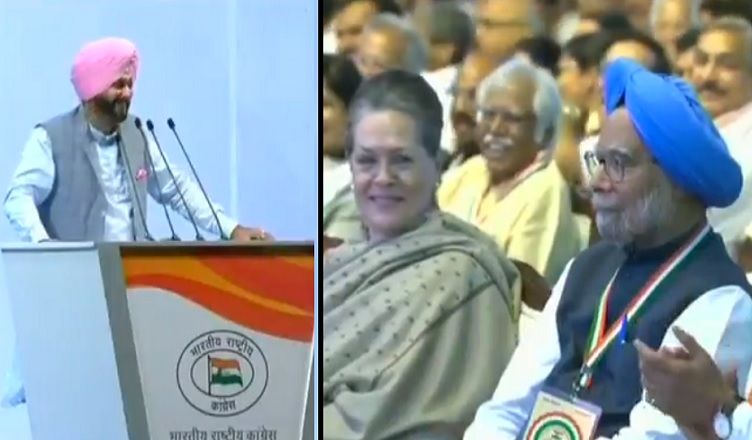 Punjab minister Navjot Singh Sidhu on Sunday was all praises for former prime minister Manmohan Singh and said what the latter’s silence did, the ruling BJP’s uproar could not, adding that he got to understand this after 10 years. “Jo aapke maun (Manmohan Singh) ne kar dikhaya, wo BJP ka shor-sharaba nahi kar paya. Ye baat mujhe 10 saal baad samajh aayi,” Sidhu said while addressing the Congress’ 84th plenary session in New Delhi.  “I want to apologise to Sardar Manmohan Singh and that too bowing down (before Singh),” he further said.

As usual, Sidhu’s speech was garnished with poetry and wit. It was seen when he said, “Aap (Manmohan Singh) sardar bhi hai aur asardaarbhi (you are both Sardar (a Sikh) and asardar (effective)”. Soon after this, the entire hall was filled with applause with former party president Sonia Gandhi and senior party leader Ashok Gehlot laughing their hearts out.

Appreciating the former prime minister, Sidhu said the economy ran like an Arabian horse under his leadership, whereas the economy is moving like a tortoise under the BJP’s rule.

He asked Rahul Gandhi to be prepared to unfurl the tricolour from the ramparts of the Red Fort post the victory of the Congress in the 2019 general elections. “Rahul bhai, karyakartaon ko samet lo, agle saal Lal Qila par jhanda aap hi phehraaoge,” he said.

Sidhu compared Congress workers with Sikander (Greek emperor Alexander the Great) and iterated that the party cannot withstand difficulties without them.

All-in-all, the party workers and everybody present there loved Sidhu’s speech.