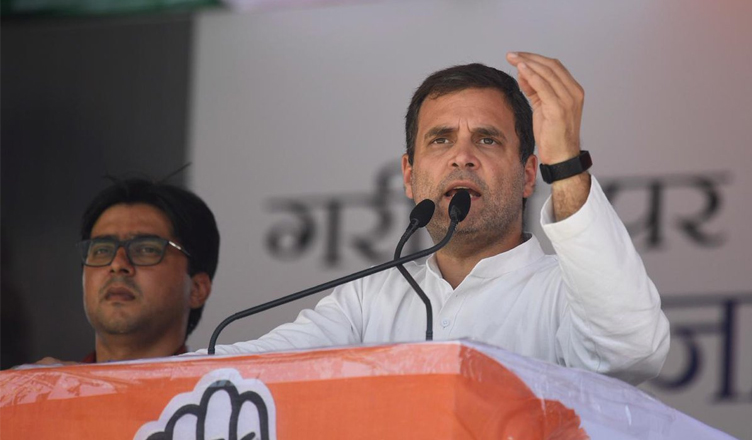 Congress President Rahul Gandhi on Saturday said that he learns something from everybody, including the Rashtriya Swayamsevak Sangh (RSS), Prime Minister Narendra Modi.

Adding further to it, the Congress Chief said that he has learned from PM Modi how not to run the country.

“If you govern the country without listening to anybody then the country cannot function properly,” he said in an interview NDTV while campaigning in Madhya Pradesh.

The Gandhi scion also said that PM Modi has “personal hatred” towards him.

“It is a country that is filled with love. He’s filled with personal hatred. At public functions I meet with him with love. Even then he doesn’t reply. I talk to him respectfully. He doesn’t talk even then,” he said.

When the interviewer said that the PM works very hard and sleeps for only three hours, the Congress Chief responded back challenging PM Modi to debate with him on issues like Rafale, jobs, corruption, demonetisation, Goods and Services Tax (GST).

Also read: The more hate PM Modi gives, the more hugs we will give him: Rahul Gandhi

On being asked that PM Modi always calls him a “naamdaar,’ Gandhi said it will be clear on May 23 (when the election results will be announced).

He further said that there is an ideological fight between the BJP-RSS and Congress.

“We are fighting against the ideology that is a threat to the Constitution. PM Modi is ignoring the intelligence of the RBI and announcing demonetisation… Wherever I go, the people of the country are saying that there is a force that is trying to control the country,” he said.

“Five years ago, some people said no one can defeat Narendra Modi. But we didn’t back down. We fought in parliament, we fought on the ground. Now he’s feeling scared. No one is today saying Narendra Modi will win,” Gandhi added.

Reacting to PM Modi’s recent claims former Prime Minister and his father Rajiv Gandhi, Rahul Gandhi said, “Narendra Modi talks about Rajiv ji, about Nehru ji, about Indira ji. I know the truth. I know my grandmother’s truth. I know it’s all lies that he is spreading.”