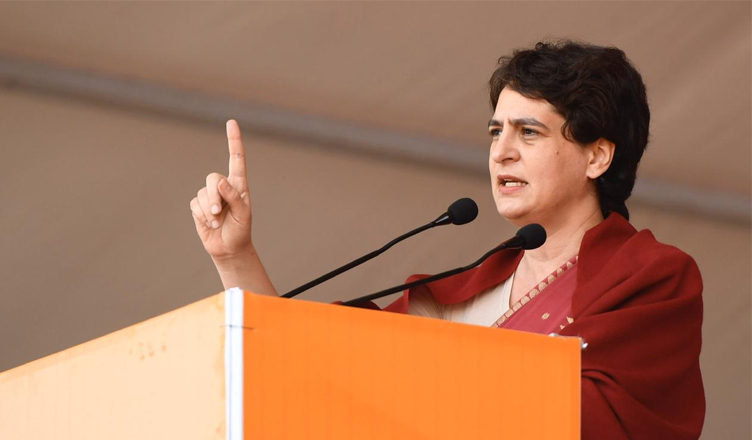 Congress general secretary Priyanka Gandhi Vadra on Wednesday said that it is in the Congress’ soul to fight for tribals and their culture and that this election is about Jharkhand’s existence.

“This state is made by the struggle and sacrifice of thousands of tribals and Jharkhandis. You did not get water-forest-land for free, you have fought long and hard. These rivers, waterfalls, ponds belong to you. You have always been at peace, but when it comes to one’s land, the Jharkhandis have never remained silent,” Gandhi said while addressing a rally in Pakur, Jharkhand.

She further said that ever since the BJP government came to power in Jharkhand, the souls and tribals of the state have been attacked.

“This election is about your land, your soul, Jharkhand’s existence. BJP attacks tribal culture. Laws protecting tribal culture for which the people of Jharkhand were martyred; Sidhu and Kanhu fought, BJP tried very hard to remove those laws. When the tribals are tortured, they remain silent. Tribal brothers were brutally murdered in Sonbhadra, Uttar Pradesh but the BJP government remained silent,”  she said.

Drawing a comparison between the style of governance of the Congress and BJP, Priyanka Gandhi said, “Indira Gandhi was always with you in your struggle for water-forest-land, worked towards retaining your authority over them. But, the BJP government is taking away your land for its rich friends. It is in Congress’ soul to fight for the tribals, to preserve your culture.”

“BJP has cancelled the ration card of 12 lakh poor families. Under Congress government, people used to get 35 kgs of rice, while today under the BJP rule, you’re getting 5 kgs,” she added.

Priyanka Gandhi further said that the BJP government is all about robbing the land of the poor and filling the pockets of their rich friends.

“In Chhattisgarh, the Congress government is paying ₹ 2500 for paddy, Jharkhand is getting ₹ 1300. 27% reservation has been given to OBCs in Chhattisgarh, what did the BJP government in Jharkhand do? BJP stopped MNREGA. Slowdown caused factories to close. Businesses, wages were lost, schools shut,” she said.

“BJP government is a ‘superhero’ in campaigning, but ‘super zero’ when it comes to governance,” she added.

“In Jharkhand too, a BJP candidate has been facing similar allegations and Modi ji is sharing stage with him and campaigning in his favor. Daughters of Jharkhand should see it for themselves,” she further said.

Concluding her address, the Congress general secretary requested people to Vote for a government that works for their interests.