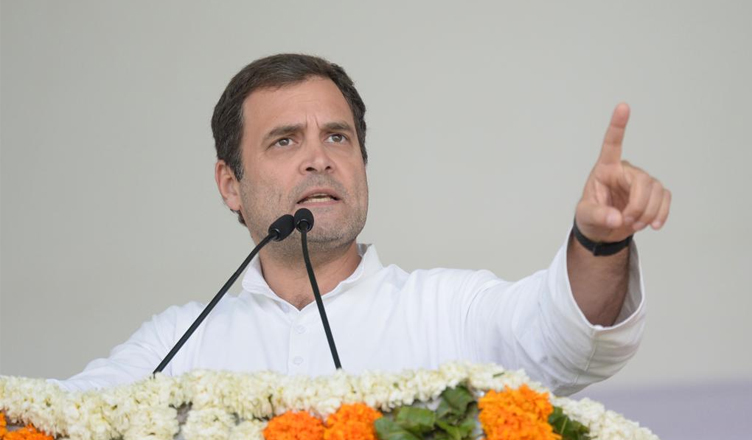 Congress President Rahul Gandhi on Wednesday encouraged India’s farmers and youth and appealed to them to fight on front foot.

“The elections have shown the strength of farmers to Modi. India’s farmers and youths should bat on the front foot and hit sixers. Modi has been playing for four years back foot after making promises,” Gandhi said while addressing a Kisan Rally in Jaipur.

Talking more about these two distressed sections of the society, Gandhi said that it is their duty to listen to their problems and that their doors are always open to the weak and marginalised people of Rajasthan.

“Farmers of Rajasthan and India face similar kind of distress. I had promised to waive farm loans within 10 days of forming the govt. I’m happy to announce that we did it in 2 days,” Gandhi said.

“When we form the government at the Centre in 2019, we will waive farm loans across the country. This is a first step to provide relief to the farmers but this is not the final solution,” he added.

The Gandhi scion further said that farmers are our biggest asset, which have been ignored by Prime Minister Narendra Modi for the last five years.

Also read: Arrests being made under scrapped Section 66A of IT Act. SC seeks response from Modi govt

“We demanded justice. If Mr. Modi can waive off corporate loans worth ₹3,50,000Cr of India’s richest, then he must waive off farm loans too,” the Congress Chief said.

Rahul Gandhi said that youth of the country are tired of PM Modi.

“With Demonetisation he wrecked small businesses. He waived off loans of India’s richest, but how many young entrepreneurs received financial support from Modi government?” he questioned.

Bringing in the issue of the controversial Rafale deal, Gandhi said that Defence Minister Nirmala Sitharaman failed to answer his questions and PM Modi was so scared that he did not come to Lok Sabha even for a minute.

“In Lok Sabha, we raised questions on Rafale scam to Mr. Modi, but, he did not even step into Lok Sabha because he was afraid. I asked simple ‘yes or no’ questions to Modi govt. Defence Minister Sitharaman spoke for hours but could not defend the Rafale deal,” he said.

Reiterating his demand for a Joint Parliamentary Committee (JPC) probe into the Rafale deal, Gandhi said that Central Bureau of Investigation (CBI) Director Alok Verma was removed by the government at midnight as he was about to initiate an inquiry into the same.

One thought on “India’s farmers and youth should fight on front foot: Rahul Gandhi in Rajasthan”