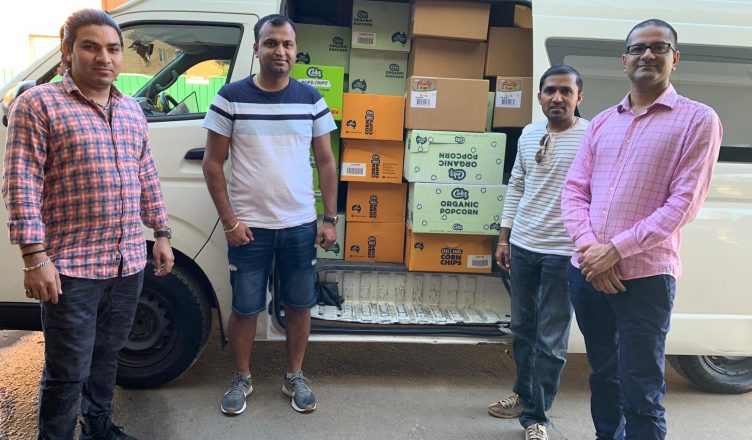 The Coronavirus pandemic has brought the world to a debilitating halt. Thousands of people are stranded and stuck, with one of the most affected groups being the students studying abroad. Far away from home in an alien land, many have expressed profound homesickness. Many students depend on income from part-time jobs to sustain themselves and with the lockdown being announced, there’s an acute paucity of jobs.

Moved by the plight of students, Manayam Rajashekhar Reddy, the vice president of the Indian Overseas Congress (IOC), Australia, reached out to those in distress. Encouraged by the president of the IOC, Australia, Manoj Sheoran, Reddy along with his teams in Sydney and Melbourne, set out delivering ‘International Student Packs.’ Each pack contains 5kg rice, 4kg lentils (2kg of two varieties), 2kg wheat flour, 2 litres of cooking oil, instant noodles, and a variety of Indian spices. These kits not only mitigate the impact of the economic fallout of the crisis, but also provide nutritious and flavourful Indian food to homesick students.

In Sydney, the president of the Gujarat chapter, Bharat Gadavhi and his team contributed several boxes of non-perishable food items so that students can feed themselves as fresh food may not always be available. Meanwhile, in Melbourne, Sukhbir Sandhu, vice president, IOC Australia, along with the Kerala chapter president Suresh Vallath and Uttar Pradesh President, Aftab Mohammed are overseeing the operations despite the stymieing challenges of traversing through the lockdown.  In addition to the regular student-kits, they are also delivering fresh fruits and vegetables. Suresh Vallath, Soban Thomas, and their team are counselling and guiding people who have visa and legal issues.

As the relief work grew in both Sydney and Melbourne, the IOC established a helpline number for distressed students to SMS/WhatsApp or call them directly. Each day they receive around 40-50 requests and despite the commuting challenges, teams of volunteers have streamlined the logistics to ensure timely help is reached. To streamline the process further, Rajashekhar Reddy designed an e-voucher which is issued to students after submission of their student I-card details.

A student from Hyderabad, pursuing her MBA, who availed help said that she was initially skeptical about calling the helpline. However, she was surprised that within 30 minutes of her request, a volunteer called and assured her that help was on her way. She expressed immense gratitude, adding that she felt very anxious as she had arrived in Australia on the 5th of March and is yet to settle in into the host country.

Taking cognizance of the anxieties that Indians in Australia might have given the uncertain future in the wake of the pandemic, Manoj Sheroan said that the IOC, Australia, is organizing a counselling session on the Zoom App, on Saturday, 18th April. Attendees can interact with professional psychologists and seek help. Further, those with queries about migration can seek advice from experts. Information about the help they can avail from the government/local NGOs will be provided over the Zoom session.

In addition to reaching out to students, the IOC Australia is also providing free legal advice, counselling on migration matters and medical assistance. Inspired by their tireless efforts, several people have come forward to contribute in whatever ways they can.

In the wake of the pandemic, Congress volunteers, whether in India or abroad, have displayed immense leadership and lived up to the principles the party espouses. They have been sensitive and proactive in rendering service selflessly. After all, political endeavours are not restricted to electoral politics and conscience driven people always find ways to contribute to a better society.