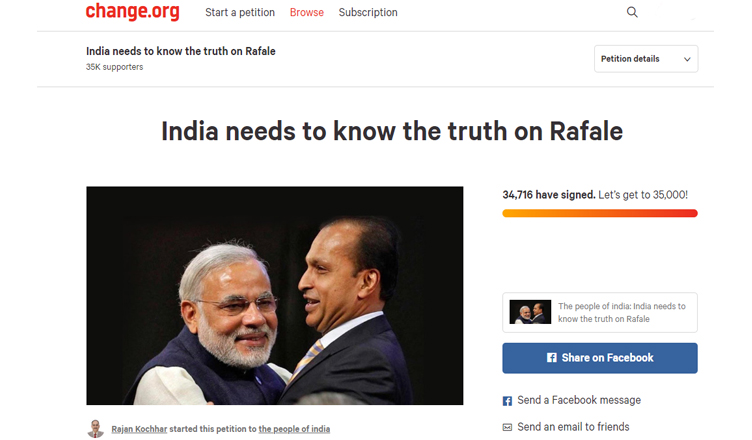 A change.org petition, seeking support for a Joint Parliamentary Committee (JPC) probe to investigate the Rafale deal so that the entire country comes to know the truth on the same, is doing rounds on social media.

General (Retd.) Rajan Kochhar started the petition on Wednesday and which is short of a few numbers to achieve 35,000 signatures.

“This petition seeks your support for a Joint Parliamentary Committee (JPC) to investigate the RAFALE fighter aircraft deal, that Narendra Modi’s Government has entered into with the Government of France,” says the petition.

Many reasons have been listed in the petition to defend the need for a JPC probe into the deal.

It says that all key decisions, including price, number of aircraft, partners etc. that have been committed to in this deal appear to have been taken by a single man – PM Narendra Modi.

“The price per aircraft has increased by about 300% over the price agreed to by the previous Government. Till date the Government has not been able to offer a reasonable explanation for this price increase,” the petition says.

“The PM’s decision to buy Made in France aircraft off the shelf, makes a mockery of his own “Make in India”emphasis. It has denied India the opportunity to become self-reliant in the manufacture of advanced aircraft and set us back at least a decade in terms of access to advanced aerospace technologies,” another reason stated in the petition.

“The cancellation of the 126 aircraft order, 108 of which would have been manufactured at HAL, with technology transferred to it, has irreparably damaged HAL. The only beneficiaries of the destruction of this valuable Public Sector Enterprise (PSU) are foreign aircraft manufacturers and private Indian companies, like Reliance Defence,” it said further.

The petition further states that a JPC will help establish whether the grave charges that have been made against the Government in the Rafale deal are justified.

If the government has nothing to fear then it should have no hesitation in allowing such an enquiry to take place. At least it will put an end to all speculation about rampant corruption in the Rafale deal.

If you want to know the truth, sign the petition by clicking on the link:

One thought on “India needs to know truth on Rafale, says change.org petition”