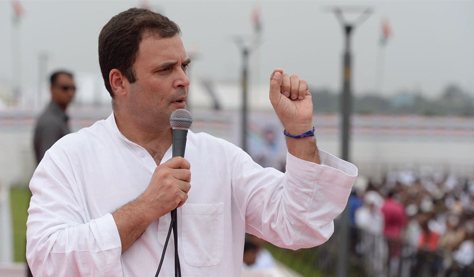 We are not here to defend Congress Vice-President Rahul Gandhi as a part of some propaganda that the ruling party is famous for. We are here to present to you the counterview to the popular narrative built around him.

In today’s India, when the very principles that formed the ‘Idea of India’ are under threat, the country desperately needs a politician like Rahul Gandhi.

There have been certain myths that have been revolving around Rahul Gandhi’s personality, such as that he is a reluctant politician or that he does not have leadership qualities and that he is a brat who does not understand the common man.

Well, let us bust these myths one by one:

1. He is a reluctant politician:

This is far from the truth. Just because he does not brag about his work, the general perception is that he is reluctant.

Firstly, can you ignore the fact that Rahul Gandhi has held key responsibilities within the Congress Party for nearly a decade now? And when we say Congress, we mean a party, with office in every block of the country and workers in every single gram panchayat. Its more complex and tedious than running a decently sized country!

2. He does not have leadership qualities:

This one is probably the best media hoax of all times. A rational person would always want a leader who believes in empowering all rather than a dictator who wants to rule and dictate. Rahul Gandhi has campaigned tirelessly and has faced criticism for failures, if any. But where the Party has done well, he has always given credit to the local leadership instead of hogging the limelight himself.

That is leadership in the truest sense!

It is disheartening to see Indian voters for decrying a leader who is willing to shun the post of Prime Minister for the larger good of the party – as he did in 2009. Also, he is a man who has always stood for the truth, even if it means standing up against his own people. He has done it so many times – when he tore the ordinance protecting corrupt leaders, or his work for the earlier Land Acquisition and Food Security bills.

3. He is a prince who fails to understand the problems of the common man:

Be it the Bhatta Parsaul agitation or campaigning for the cause of Dalits or standing with the farmers or the traders who have been cheated by demonetisation and GST – all these instances have proved otherwise.

The Nukkad Sabhas, that the many political parties have been doing now, have been done by Rahul Gandhi since years. He did not only meet but dined and lived with the poorest of the poor to understand their needs.

People say Rahul Gandhi is born privileged, but it is this ‘privileged’ man who has linked his destiny with the weakest of the country. He believes that India can only progress if rural India progresses, if the farmers and the poor artisans progress, if the common man progresses. And he has championed their cause again and again.

We elect hooligans as MPs, scamsters as ministers. We appoint people with arguable human rights records as PM, but we fail to judge Rahul Gandhi on the merits of what he has done and wants to contribute to the nation.

Yes, Rahul Gandhi, is a minister who believes in working behind the scenes and give the lead to others. Yes, he is a ‘prince’ who works as a Karyakarta. Yes, he is a leader, who chooses to be subtle and humble instead of loud and brash.

Doesn’t India deserve a kind and honest leader who has some integrity? Or do we still prefer someone who has no respect for the Constitution and its ideals and who is hellbent in destroying the ‘Idea of India’? Do we want someone who stands for the common man and the poorest of the poor or someone who just cares in promoting the interests of a few corrupt industrialists?

Do we want someone who believes that the real power lies in the hands of the people or do we want a megalomaniac to destroy India?

Do we want substance or just noise?

The choice is yours.