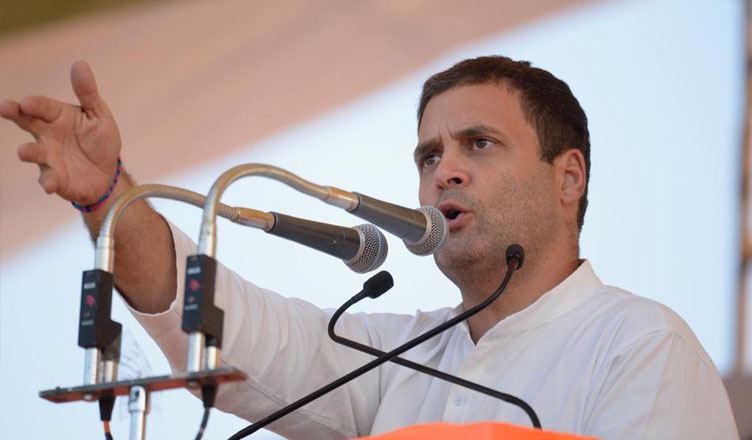 Taking a jibe at Prime Minister Narendra Modi, Congress president Rahul Gandhi on Tuesday said that in the past four year, the slogan changed from ‘achhe din aayenge’ to ‘chowkidaar chor hai.’

“In 4 years, we have reached ‘chowkidaar chor hai’ from ‘acche din aayenge.’ This is the magic of PM Modi,” Gandhi mocked while addressing a rally in Madhya Pradesh’s Khargon.

Gandhi lashed out at the government for creating two types of India, one consisting of the rich such as Nirav Modi, Mehul Choksi, Vijay Mallya, Anil Ambani etc and the other of farmers, labourers, small traders.

“Everyone knows about the relationship between former Prime Minister Indira Gandhi and Aadivasis. In every decision, she first took the marginalised communities into consideration,” Gandhi said while showing contrast between the two parties.

“Congress governments have given Right to Food, Right to Information. What did BJP govt of Madhya Pradesh do in last 15 years?” he added.

Reacting to Madhya Pradesh Chief Minister Shivraj Chouhan’s action of suing Gandhi for his wrong statement, the Gandhi scion said that the BJP can file any number of defamation cases on him to stop him from telling the truth but everyone knows how 50 witnesses in the Vyapam scam case were killed.

The Gandhi scion assured that the Congress government will create a centre of development in each district of Madhya Pradesh.

“Indore’s potential is no less than that of Mumbai’s. The BJP government did nothing in these 15 years to use this potential. Congress govt will create a centre of development in each district of Madhya Pradesh,” he said.

Earlier in the day, Gandhi hit out at the BJP and said the fundamental difference between the grand old party and the BJP is that while the former believes in breaking monopolies, the latter supports monopolies.

“India’s progresses rapidly when monopolies were broken. Liberalisation of 1991 was a prime example. Fundamental difference between Congress & BJP is that Congress breaks monopolies and BJP supports monopolies. Today, 15-20 of the India’s biggest industrialists have imposed a monopoly on the banking system,” Gandhi said while interaction with the business community and professionals in Indore, Madhya Pradesh.