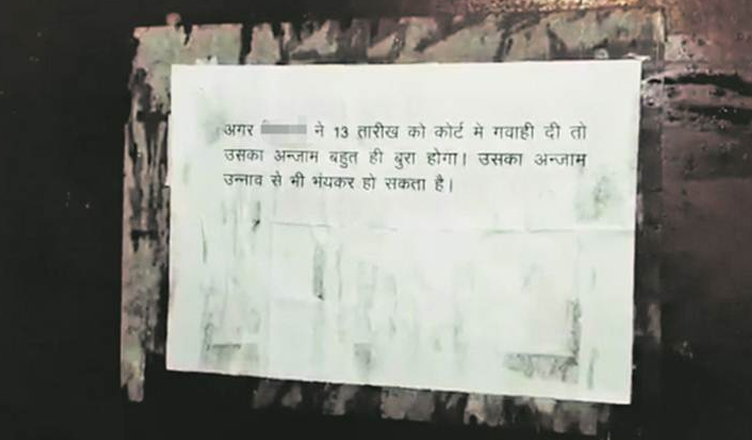 A 25-year-old woman was to appear in a New Delhi fast track court for a hearing today. Two days back, on Wednesday, the main accused in the rape case and others pasted a pamphlet outside her residence in Uttar Pradesh’s Baghpat threatening her not to testify in the court otherwise the consequences will be worse than what happened in Unnao.

The Unnao rape victim, was on her way to a court in Rae Bareli to attend a hearing in the rape case on December 05, when she was beaten up, stabbed and set ablaze by five men. She died in Delhi’s Safdarjung Hospital on December 07.

The victim’s grandfather lodged a complaint with the Kotwali police station in Baghpat rural, following which the accused was arrested.

“Based on the FIR, we have arrested the accused Sohran, 28, late last night under IPC section 506 ( criminal intimidation) and also seized the pamphlet. We have provided security to the family,” Pratap Gopendra Yadav, SP, Baghpat told The Indian Express.

The victim and accused are from the same village.

The woman used to stay with her driver father in Delhi and was preparing for the Short Service Commission (SSC) examination.

“In July 2018, accused Sohran called her over to his rented apartment in Delhi’s Mookherjee Nagar on the pretext of helping her out with studies. He gave her a cold drink allegedly laced with sedatives and raped her. His friends video recorded the act,” the police told The Indian Express.

“My daughter was threatened the video would be leaked in social media if she spoke out, and she was raped again. When she told me about the incident, we immediately lodged an FIR at the Mookherjee Nagar police station on July 9, 2018,” The Indian Express quoted the woman’s father.

Sohran was arrested in July last year but got bail in January.

One thought on “If you testify then consequences will be worse than what happened in Unnao: Baghpat rape victim threatened”