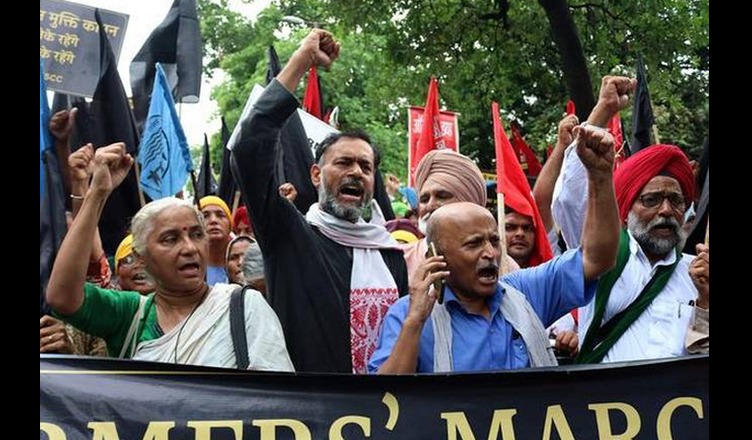 What if a no-confidence motion could not be passed in the Lok Sabha, the farmers outside already passed a no-trust verdict against the Prime Minister Narendra Modi-led NDA Government.

The All India Kisan Sangharsh Coordination Committee (AIKSCC) on Friday organised their own Kisan Avishwas Prastav Sabha (Farmers’ No Confidence Motion Assembly). Under it, thousands of farmers unanimously passed a no-confidence motion against the Modi government.

When Swaraj India president Yogendra Yadav asked the farmers gathered one kilometre down Sansad Marg to raise their hands if they had no confidence in the government, all present there raised their arms.

“This government has failed to keep any of the promises it made to farmers in its election manifesto. It’s so-called historic MSP hike is simply a fraud … The last three governments — two led by Manmohan Singh and one by Atal Bihar Vajpayee government — gave higher increases,” The Hindu quoted Yadav as saying.

The farmers were also seen raising black flags reminding the government of its failed promised made to the farmers of the country.

There has been a growing resentment among the farmer community against the Modi government.

Recently, the Bharatiya Kisan Mahasangh threatened to go on strike if the Bonli farmers’ demands of payment of insurance premium and compensation for loss of crops were not met.

In a meeting on ‘farmers awareness’ at the organisation’s headquarters, the farmers urged farmers from nearby villages to join the strike.

Meanwhile, the All India Kisan Sabha (AIKS) has said that it would hold a rally against the “anti-people” policies of the Prime Minister Narendra Modi-led government in Delhi in September.

The Modi government has failed the farmers of the country. They have failed to understand their grievances and have not shown any interest in bringing any relief to them.