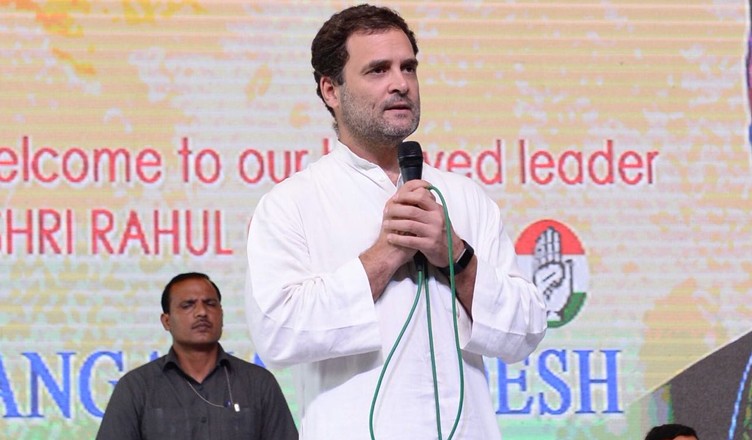 Highlighting the importance of the role of women in taking a country forward, Congress President Rahul Gandhi on Monday said that when the Congress will come to power, its focus would be on providing employment and ensuring the safety of women.

“When Congress comes to power, our focus is going to be on providing employment and ensuring the safety of women,” Gandhi said while addressing a gathering in Telangana’s Hyderabad.

The Congress Chief also hit out at the National Democratic Alliance (NDA) at the centre and said the latter did not think women to be important in nation building.

“When we come to power, we will provide pensions for women in Self Help Groups. This is your right. If we want to move forward as a country, women need to be given their due. Congress party believes that this country cannot move forward without the contribution of women. But our governments both at the Centre and state, think women are not important in nation building,” he said.

“10 years ago, bureaucrats told me that UP cannot have SHGs. We brought women from Telangana’s SHGs to teach the women there to run SHGs. The women of Telangana proved them wrong. Today in UP, 15 lakh women work in SHGs. When the Congress comes to power, we will ensure greater availability of loans to SME’s and SHG’s run by women,” the Gandhi scion said.

Hitting out at the government’s two blunders of GST and demonetisation, Gandhi said when the grand old party comes to power, they would provide a GST with a single tax rate.

“After Demonetisation, when all of you were standing in long queues, did you find a single rich person? No. Because, they were busy converting all the black money they had into white. You were told that demonetisation was aimed at fighting black money. You were forced to deposit your money in the bank. That money is now being used to waive off loans of big industrialists,” he said.

Speaking on the same lines, Gandhi assured that they make promises and fulfil them as well.

Earlier today, Gandhi was in Karnataka’s Bidar where he addressed a gathering.

He then headed to Hyderabad, Telangana to meet representatives of SHGs and to address a gathering.