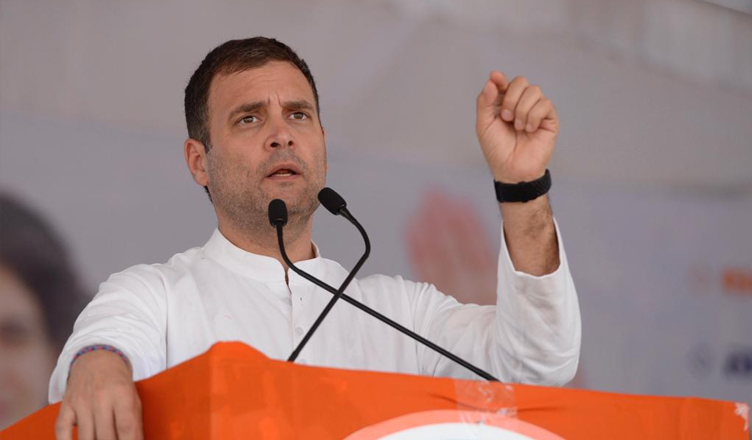 Congress President Rahul Gandhi on Sunday promised that if the grand old party comes to power, it will provide Special Status to Andhra Pradesh.

“We will support Andhra Pradesh in building itself into one of the most advanced states in the country,” he added.

“We introduced the Land Acquisition Bill to protect the lands of farmers, tribals and Dalits. With all these policies we lifted 14 crore people out of poverty. In 2014, Mr. Modi began to dismantle everything we had done. Mr. Modi destroyed the pillars of MNREGA and Food Security Bill. He started to handover the MNREGA money to contractors instead of labourers and snatched away food security bill,” he said.

“NYAY is a simple idea. We will identify the 20% poorest people of India whose income is less than ₹12000 per month and they will be given ₹72,000 annually. This will benefit 5 crore families, approximately 25 crore people. We will deliver NYAY, like we delivered MNREGA, White Revolution and many other policies,” he said.

Highlighting the problem of unemployment, which is currently the highest in 45 years, Gandhi said that they take the money PM Modi has given to people like Anil Ambani and give it to young entrepreneurs of the country.

“We will make sure that young entrepreneurs can start their business easily. Today, one needs to go to several govt department for permission. We have committed that for 3 years they don’t have to take any permission. Government schemes and incentives will reward people who create jobs for this country,” he said.

Gandhi also promised that if the Congress is elected to power in the state, the party will waive off farm loans within two days.

“I want to commit this to the people of Andhra Pradesh. Bring us to power in AP, we will waive off farm loans within 2 days, like we did in MP, Rajasthan and Chhattisgarh. We will further connect farms to best infrastructure,” he said.

Later in the day, Gandhi will address another rally in Anantapur.

He will then head to Bengaluru, Karnataka, where he will address a joint rally along with Janata Dal (Secular) (JD(S)) chief HD Deve Gowda.