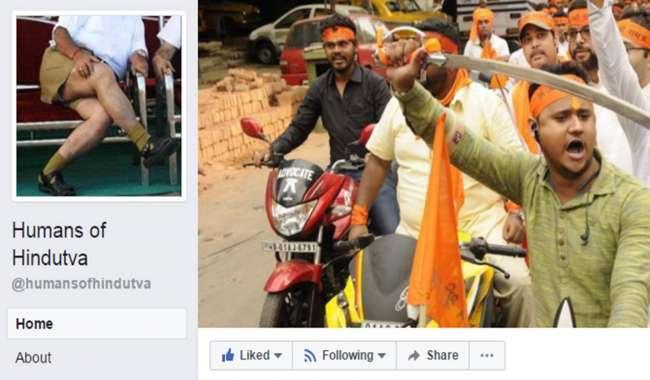 The Facebook page, Humans of Hindutva, that countered right-wing fundamentalism through humour, wit and satire, was taken down on Thursday evening.

Inspired by Brandon Stanton’s ‘Humans of New York’, ‘Humans of Hindutva’ gained immense popularity in just eight months. One can measure its popularity by the fact that the news of it being taken down has been published in eminent news websites and a hashtag Humans of Hindutva is trending on Twitter.

As per a note published on the administrator’s website, he decided to take down the page after receiving death threats.

“I’m quitting out of my own accord. I’ve not been banned or mass reported. I have recently received some threats to my life which I can’t take lightly. I am outnumbered, live in a BJP state and come from a middle-class family with no political or police connections. I have no desire to end up like Gauri Lankesh or Afrazul Khan. Actually, more than myself I worry for the safety of my family.  I hope those who threatened me consider this as a victory and leave us alone. I have deleted the HOH page and will delete this website soon. Congratulations to Hindutva on winning this David vs. Goliath fight. As for those who were kind enough to lend me their ears for the last eight months, I’d like to wish you all a Happy New Year. Cheers and alvida. Thanks for giving me some of your time,” he wrote.

Earlier in September, he called it quits but resumed posting within a couple of hours after receiving tons of messages from his readers.

Earlier this year, Facebook had blocked his page after users, offended by his mockery on right-wing fundamentalism, mass reported it.

This is yet another example of liberal voices being muzzled in PM Modi’s India. Anyone who dares to question the government and its policies through any medium is intimidated, threatened, labelled as an anti-national, and many a times even physically attacked.

This fear of threat from none other than the current government and the negative backlash from its violent supporters has forced Humans of Hindutva to shut down.