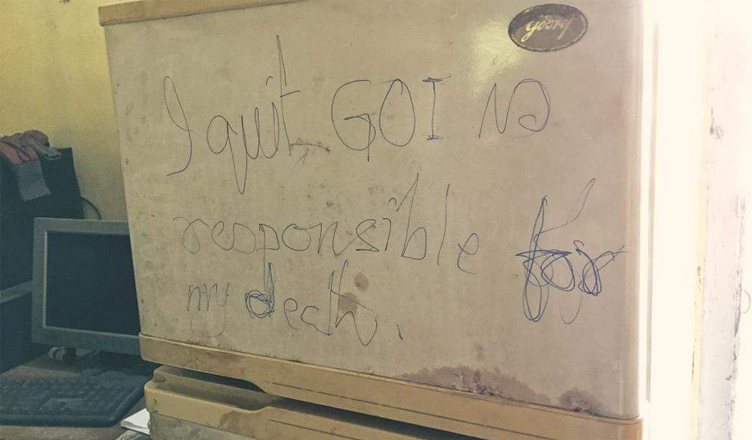 When colleagues of Biswajit Majumdar, Utility and Distribution Manager at Assam’s Nagaon mill of Hindustan Paper Corporation (HPC), a public sector undertaking, broke open the door of his officer’s quarter on April 29, they found his decomposing body hanging from ceiling fan.

Something was written on the door of the refrigerator. It read, “I quit. GOI (Government of India) is responsible for my death.”

The Nagaon Paper Mill was closed on March 13, 2017 and since then, Majumdar, as well as other employees, had not received salary.

As reported by National Herald, Majumdar was taking care of his expenses and his family’s by whatever savings he had. A few months back, he had to dip onto the last portion of his savings kept in the form of an insurance policy. It is after this that Majumdar resorted to this extreme step.

Also read: 67% of Indians think job opportunities in India have gotten worse over past 5 years

According to National Herald, Majumdar is the third employee of the Nagaon Mill to have committed suicide. Adding the Cachar and Nagaon mills together, the death toll has now reached 55.

Following no response from the Prime Minister Narendra Modi-led NDA government, employees of the Nagaon and Cachar paper mills (both situated in Assam) of the Hindustan Paper Corporation (HPC) had approached the National Human Rights Commission (NHRC) on February 6 and requested it to take actions against the Central government. The employees alleged that the government has not deposited their Provident Fund, Life Insurance Corporation (LIC) policy amount, salaries and other statutory dues.

One thought on “HPC employee commits suicide after no salary for 27 months, blames Modi Govt”