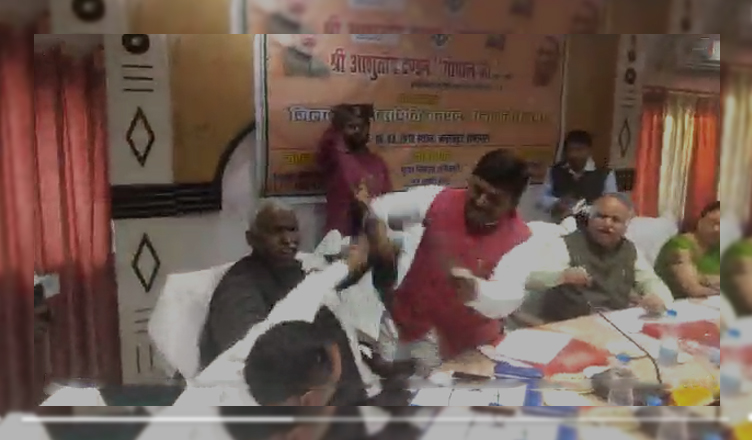 In a video that has gone viral now, a Bharatiya Janata Party (BJP) MP can be seen hitting a BJP MLA with his shoes after a fight erupted between the two over seeking credit for a new road.

The video, which has gone viral on social media, shows BJP MP Sharad Tripathi getting angry at MLA Rakesh Singh because his name was missing from the foundation stone for a local road.

The duo along with other party members were attending a meeting of District Planning Committee in the Collectorate Auditorium at Sant Kabir Nagar, nearly 200 km from Lucknow, when the scuffle broke out.

The Congress mocked the BJP by sharing its clip and writing, Presenting the entertainment for today, the Bharatiya Joota (shoe) Party.”

“आज का मनोरंजन पेश करते हुए भारतीय जूता पार्टी. Disclaimer: This act has been performed by experts, please do not attempt this on anyone. #MeraBootSabseMazboot,” its tweet read.

Disclaimer: This act has been performed by experts, please do not attempt this on anyone. #MeraBootSabseMazboot pic.twitter.com/vs4h34khkD