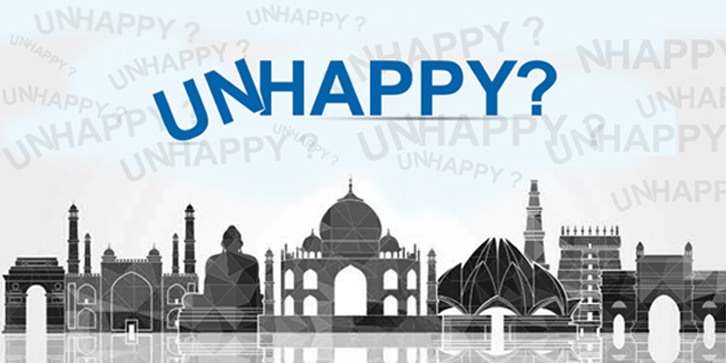 Skyscrapers, well-planned roads, greater connectivity is all achievable but where a government can lack is at making its people genuinely happy, content and joyful. Norway is the happiest country as per The World Happiness Report 2017, whereas India is ranked 122th in the list. Why is it that we rank so low on the list?

An interesting part of this survey is that the Happiness index is measured by keeping in mind certain parameters such as good governance, socio-economic development, preservation and promotion of culture and environmental conservation.

It is a more holistic and inclusive definition of development, and perhaps the only one that is closer to accuracy. As per these factors, governance is directly proportional to happiness. With that logic, India’s low ranking points towards the BJP’s bad governance and poor leadership, despite tall buildings and shiny roads. India’s rank has only declined since the BJP Government came to power, from being 117th in 2015 to 118th in 2016, to further declining to 122nd this year.

Come assembly elections in Gujarat, the land of Mr. Modi, whose “development model” is most touted, the Congress party will fight the elections on the plank of the happiness index, as opposed to the “development” claimed by the BJP. We firmly believe that the road to development leads via happiness. Having a holistic approach, we concentrate on attaching the same importance to both, economic as well as non-economic aspects. We believe in putting people’s well-being right at the center of the government’s efforts and it is exactly the same that we will implement in our functioning.

As pointed out by Congress Vice President Rahul Gandhi, the “development model” of Gujarat has not reached the last person in the queue. It has merely affected 5-10 big industrialists, while farmers, small traders, tribals, Dalits, and youth remain untouched by the much-touted magic pill of development. It is clear that Mr. Modi’s development is not inclusive.

A churning is being witnessed in Gujarat. The Congress is re-energised after the recent victory of senior leader Ahmed Patel in the Gujarat Rajya Sabha, despite unethical means adopted by the BJP to subvert the democratic process. Mr. Gandhi’s visits to the state in the run-up to the election will further energise the party workers, and the masses, who have long waited for an alternative to the naked dance of partial development.

In Gujarat, there is a need to fix the happiness index, and only the Congress party can do so.