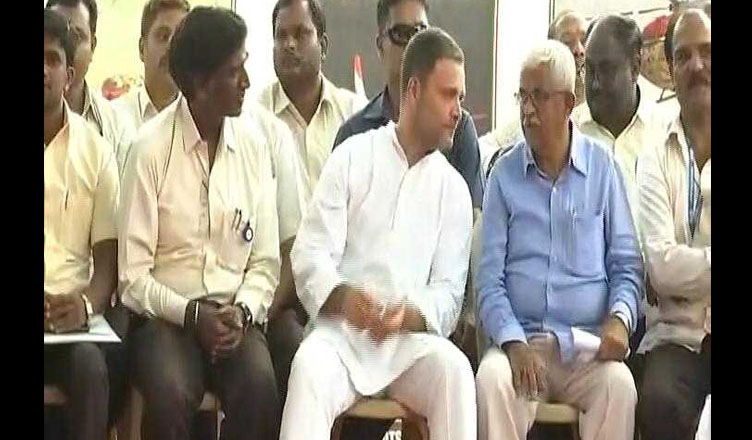 Former and present employees of Hindustan Aeronautics Limited (HAL) on Saturday shared their anger and pain with Congress President Rahul Gandhi over the rejection of the state-run defence manufacturer in the Rafale deal and instead giving it to Anil Ambani-owned Reliance Defence Limited which does not have any prior experience in manufacturing jets.

As soon as Congress Chief Rahul Gandhi said he was there to listen to the difficulties employees were facing, people poured their hearts out and expressed their disappointment.

“HAL is not just a company, it is a strategic asset that we built after independence. The work you have done for the country is tremendous, the country owes a lot to you. I am here to listen you. I want to find out your problems and work out ways to make HAL more effective,” Gandhi said while meeting the HAL employees at Minsk square, Bengaluru.

One of the former employees, Sirajuddin said that they would not tolerate the insult hurled at HAL.

“HAL is leading the aviation industry in South East Asia. Do you want to kill this industry? It is an insult and injury. We will not tolerate this,” he said.

“We have been insulted and let down. A company of 70 years of experience is thrown out of the Rafale agreement. I do not understand. A large and experienced company that should have been improved. You are killing us,” he added.

“During the Cold War, HAL was the only company that had an opportunity to work with Russian technologies. It is the best organisation in Asia,” said Babu T Raghav, former Engineer of IAF.

Another former employee Mahadevan said, ” Bengaluru was the Public Sector Capital of India. Protecting our employment is the most important thing. In the new Rafale agreement, there is no transfer of technology.”

The Gandhi scion said that when former American President Obama says that India and China are the only two countries that challenge USA, then HAL is also a big part of it.

“When Mr. Obama says there are only 2 countries that challenge USA and they are India and China, you(HAL) are an important part of it,” he said.

“HAL, for me, is not just a company. It is an institution. When we got our independence, India built strategic assets to enter aerospace sectors. The work you have done is tremendous & the country owes a huge debt to you,” he added.

Gandhi further said that since the Government will not apologise for what it has done, he would apologise on their behalf even when he has nothing to do with it.