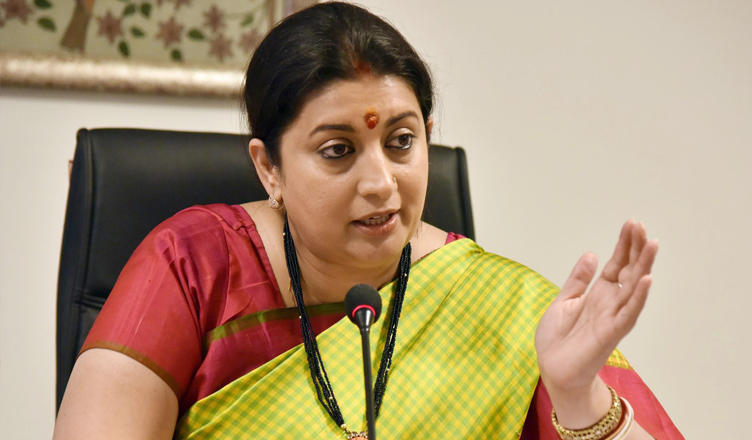 While Union Textile Minister Smriti Irani made a positive comment about the textile sector receiving good investment in Gujarat post the Bharatiya Janata Party (BJP) came to power at the Centre, a report released by her shows that the state witnessed a negative growth in several segments of the textile sector.

At an event during the Vibrant Gujarat Global Summit, Irani said that the textile sector in Gujarat received Rs. 30,000 crore of investment since the time the BJP came to power at the Centre. However, a eport released by her at the same event shows that many segments in the textile sector registered a negative growth between 2012 and 2017.

“There are some Gujarat specific commitments that we have made and some that we have implemented… Since 2014, for technology upgrade across the country, the Government of India dedicated over Rs 7,286 crore of which Rs 1,855 came specifically to Gujarat, benefiting over 2,100 units. Close to Rs 30,000 crore of investments have flowed to Gujarat, post the subsidies given by the Government of India. Gujarat politically has seen those days when there was a struggle between the Centre and the state so that the aspirations of Gujaratis are not disrespected. When I was given the charge of the ministry, I did look at the numbers of pre and post 2014. I am happy to say, before 2014, though Gujarat was given only 9 textile parks sanctioned by the then government, we have sanctioned 17 textile parks worth Rs 5,614 crore of which six are already completed,” Irani said at the event.

On the other hand, the report titled “Gujarat: The growing engine for textile and apparel manufacturing”, which was released by Irani at the event states that Gujarat’s fabric production registered a de-growth at a compound annual growth rate (CAGR) of -2 per cent in the last five years.

“Hundred per cent non-cotton yarn is the only category which is growing at a CAGR of 3 per cent, while cotton and blended yarn have registered a de-growth of -0.4 percent and -1.8 percent, respectively, during the same period,” it added.