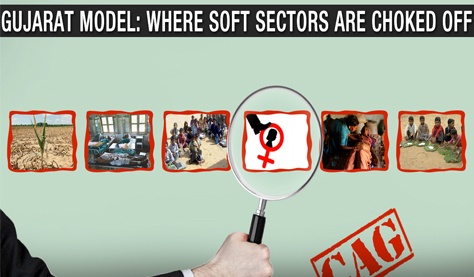 For one to benefit, the others must lose. This statement has never before found better representation anywhere else than in the “Gujarat Model”.

We have already explored the crony enterprise of the Gujarat PSUs and how the model benefits only a handful of industrialists in articles posted in this section.

One such another aspect is how the “Gujarat model”choked off the soft sectors of the economy.

The CAG slammed the Gujarat government over the continuous decline in child sex ratio and child marriage cases. “It is observed that sex ratio at birth in 15 of the 26 districts of the state declined in 2013. While the All-India sex ratio improved from 933 to 943, it worsened from 922 to 919 in Gujarat”, the CAG noted.

In case of child marriages, the report said, “Out of 659 complaints of child marriages received in 2009-14, court cases were filed in only 15 cases and not a single person was convicted in the state during the review period.”

“Out of 43,176 government-run schools in the state, 64 schools having 5,698 students run without any teacher. Further, 874 schools function with merely one teacher as on March 2014,”the report read.

The falsely advertised agriculture sector was also exposed by the CAG report, revealing the true plight of the farmers in Gujarat. According to the report, against 21.64% growth in 2010-11 and 5.02% growth in 2011-12, Gujarat registered -6.96% growth for the first year in the 12th Five Year Plan.

With a criminal ignorance of the soft sectors by the government, Gujarat has seen one of the worst performance across Maternal and Neo-natal health indicators. Comptroller and Auditor General, in its report, revealed that maternal mortality rate (MMR) has been rising in the State since 2014, up from 72 in 2013-14 to 85 in 2015-16 per lakh.

The farmers, the Dalits, the Adivasis, the women, the children, the youth and the less fortunate are all bound to suffer morbidity if the BJP continues to reign.