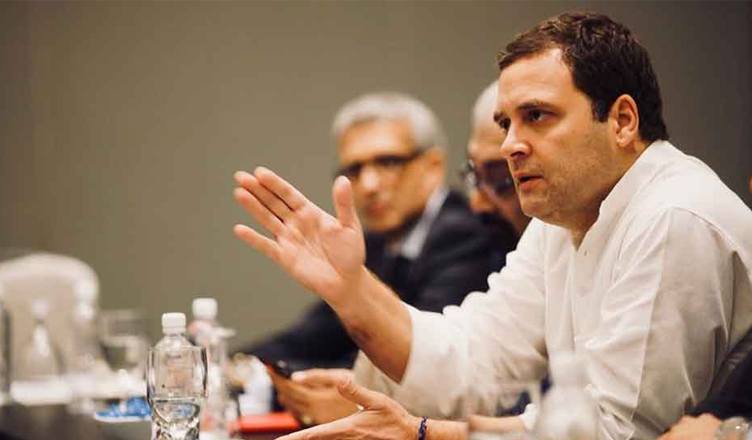 Congress president Rahul Gandhi took a dig at Prime Minister Narendra Modi with regard to a recent video doing rounds on social media showing the latter giving a pre-scripted interview.  “The first Indian PM who takes “spontaneous” questions that the translator has pre-scripted answers to! Good that he doesn’t take real questions. Would have been a real embarrassment to us all if he did,” Gandhi tweeted.

The tweet also had that video attached to it. The video is of Modi’s interview by Nanyang Technological University president Subra Suresh in front of a live audience. What it looks like is that while Modi was answering to a question put by a pre-decided member from the audience, he forgot his answer and ended up giving a slightly different answer from what he had prepared. But, when the translator answered the question, it was different from what Modi had answered in Hindi. It kind of showed that the translator was reading out a scripted answer which, for obvious reasons, did not match with what Modi answered impromptu.

The first Indian PM who takes "spontaneous" questions that the translator has pre-scripted answers to!

Good that he doesn't take real questions. Would have been a real embarrassment to us all if he did. pic.twitter.com/8Iyfgiaseh

This stands in contrast to the Gandhi scion, who, during an interaction at Singapore’s Lee Kuan Yew School of Public Policy, took up questions criticising the time when the Congress was in government. Rahul Gandhi fearlessly answered a question posed by a person, apparently planted by the BJP only to humiliate the Congress on global stage. But, they disastrously failed at it because the Congress president frankly answered the question and with such assertion that the person who had raised the question was left with no other thing to counter.

Congress’ Twitter handle also tweeted a video with regard to the same, showing a contrast between a ‘genuine leader’ and ‘PR creation’.