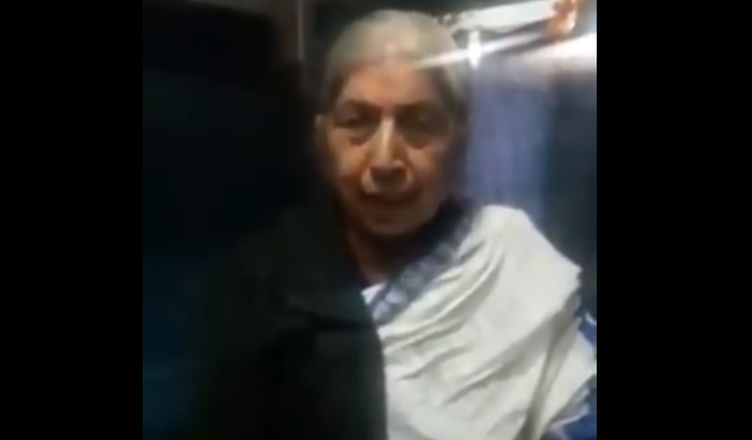 Bharatiya Janata Party (BJP) leader from Amritsar and former Punjab health minister, Laxmi Kanta Chawla, who was furious over the 10-hour delay of the Saryu-Yamuna train which she was aboard, recorded a video message and requested Prime Minister Narendra Modi and Railways Minister Piyush Goyal to forget bullet train and instead focus on trains already running.

The video that is doing rounds on social media, an evidently angry Chawla talks about the loopholes she observed while travelling in the train. She talks about broken doors, broken toilet seats and criticises the railways for not having any food arrangement in the train for those who had been on the train for the last 10 hours.

“I want to appeal to the Indian Government and Modi ji to show some pity on us (the common man). The trains are in such a dilapidated condition, the doors are broken, the latrine (washroom) taps are broken, the toilet seats are broken. Even the AC doors do not open smoothly…The route of the train had been changed due to some reason but we were not given any information about it…For God’s sake, forget bullet trains. Forget trains that run at 120kmph or 200 kmph. Fix those trains that are already there,” Chawla can be seen saying in the video.

She goes on to speak about the pathetic conditions at the railways stations, where there are no waiting rooms and people are forced to wait for their trains on the platforms in this chilly weather.

“Since yesterday, I have tried so many helpline numbers but to no avail. I even sent my complaint by mailing it to Piyush ji but there is nobody to listen to us,” she said.

“I am highly disappointed by this experience of mine,” she added.

She further said that no “acche din” had arrived for the Indian Railways.

Listen to the video here:

Senior @BJP4India leader from Amritsar Laxmi Kanta Chawla tells @narendramodi & @PiyushGoyal to "forget" about #bullettrain and instead focus on those already running.
She made this video aboard the Saryu-Yamuna train which was delayed by 14 hours.
Part 1 of the video: pic.twitter.com/dC0ZEyk1ge

Here is part 2 of the video BJP leader @laxmi_chawla made aboard the Saryu-Yamuna train while on her way from Amritsar to Ayodhya.
" It would be better if you travel in these trains like a common man @PiyushGoyal ji, " she says. pic.twitter.com/EXOc6TkAjh