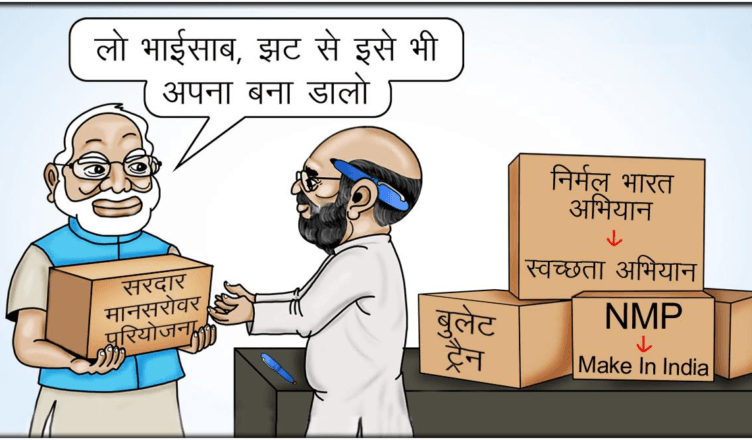 It is a known fact that BJP repackaged a number of UPA schemes and launched them as new projects for taking credit, primarily to score cheap political points.

It would have been still acceptable and fine, had the BJP done something good with these schemes and would have done wonders. But, unfortunately, the saffron party could not even achieve that.

An article in the Wire titled as “Modi May Have Repackaged 23 UPA Schemes, But Most Are Working Better Now” is the first ever instance of someone officially associated with the BJP publicly admitting that Modi indeed renamed the old UPA schemes and re-launched them amidst huge publicity as new schemes. However, the author of this article, who have been employed by the BJP to consult on election campaigns, drew a comparison of the projects’ performance before and after the name changes.

However, the interesting method of comparing UPA governments’s last two years with Modi’s governmetnt’s first three years has failed to fool us.

They have only tried to mould the facts according to their convenience, showing themselves in good light and maligning the image of the Congress.

Say for example, the second scheme mentioned in the article is India Awas Yojana (IAY) compared with what’s now being billed as Pradhan Mantri Awas Yojana (PMAY). Using standing committee on rural development’s report of houses constructed from 2011 to 2015 stood at 5,430,877 units claiming that they used only the partial data. However, while claiming about the implementation success of PMAY under Modi, the authors cleverly refuse to state the actual number of houses constructed. Instead, they mention the approval of 10,000,000 houses citing this Q & A in Lok Sabha.

Though RAY was announced by the then PM in his address to nation on August 15, 2009, the preparatory mode – pilot project – started in 2011 with a two year window to complete. Based on that, RAY became a Centrally Sponsored Scheme (CSS) in the current form only on 3rd September 2013 with a time-span lasting till 2022. The authors’ claim on numbers, therefore, have to be corrected.

In their article, the officials associated with the BJP relied on the numbers published by the Ministry of Housing and Urban Poverty Alleviation. For a minute, let us not question their claims claim, but instead look at the numbers to calculate the speed with which the scheme is progressing.

As per estimates, nearly 20 million affordable houses have to be built by 2022 for the completion of the mission. As the scheme started in 2015, 28 lakh houses have to be constructed every year to make the stated numbers sound logical. But, as per the data submitted by the authors, only 133,999 houses have been constructed till 10 July, 2017 as opposed to expected 56 lakh houses. Perhaps this is a shining example of better implementation of previous UPA schemes under Modi.