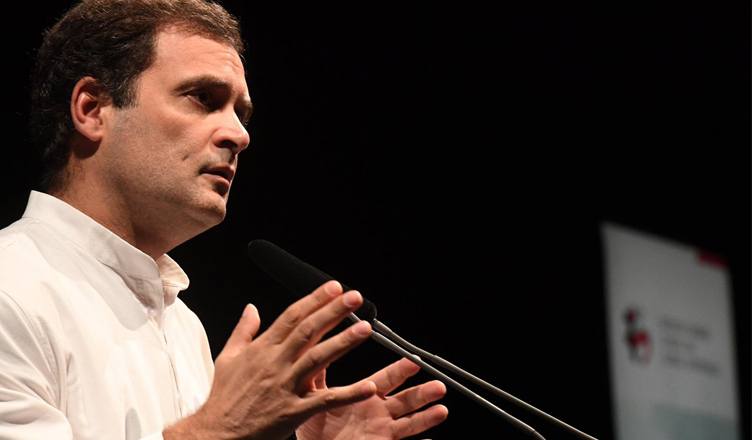 Hinting towards the growing incidents of violence in the country, Congress President Rahul Gandhi on Wednesday said that the only way to fight violence is with non-violence.

Narrating his own experience post his father former Prime Minister Rajiv Gandhi’s death, the Congress Chief said that when the same terrorist who killed his father died a few years later he did not feel happy.

“The only way you can fight violence is with non-violence. I have suffered violence and I can tell you, there is only one way to let it go – Forgiveness. My father was killed by a terrorist in 1991. When the same terrorist died a few years later, I wasn’t happy. I saw myself in his children,” Gandhi said while addressing a gathering at Bucerius Summer School, Hamburg.

“In a connected world, you have to listen to what they’re saying and where they’re coming from. I can fight a person and disagree with them, but hating is a choice. Hate is a dangerous thing,” Gandhi said while pitching for love and non-violence as the tools for creating peace.

Gandhi also traced the creation of ISIS to warn against a similar situation back in India if people are excluded from the development process.

“A law stopped a particular tribe to participate in Iraqi society, they went on to create an insurgency in Iraq which caused to massive casualties to the US Army. It’s very dangerous in the 21st century to exclude people. If you don’t give people a vision in the 21st century, somebody else will give them one and that may not be good for you and the world,” Gandhi said.

He further accused the BJP of excluding Dalits, minorities, tribals from the development process.

“The Dalits, minorities, tribals are now not allowed to gain from the Govt. All the money that used to go into schemes for the poor are now going to a few large corporates,” he said.

He further said that all the governments before 2014 believed in involving all communities and language in the transformation of India post independence.

Also read: Congress gets a new treasurer but name of BJP treasurer still a mystery

“70 years ago, India was locked up in thousands of villages. India was a rural country where people lived in a caste driven society. The transition of India began slowly. The transition was essentially breaking the idea of caste and enabling ‘one man one vote’. If India was to go through this risky transition, we wanted all the communities and languages to be involved in this transformation. As we transform, the Govt should help its people smoothen this traumatic change. So, all governments until 2014 followed this idea very strongly,” he said.

Bringing the focus back on the rising incidents of lynching the country, the Gandhi scion blamed joblessness, destruction of businesses due to demonetisation and shoddy implementation of GST.

“Couple years back, the Prime Minister demonetised the Indian economy and destroyed the cash flow of all MSMEs and millions of people who worked in the informal sector were left unemployed. A large number of people who worked in small businesses were forced back into villages. This is what’s making people angry. All the lynchings we hear about are the result of this,” he said.

Rahul Gandhi will today be in Berlin, Germany, where he will address the Indian Overseas Congress.

He will also be on a two-day visit to London beginning from August 24. In London, he will indulge in interaction with students of International Institute of Strategic Studies and London School of Economics on the first day. On August 25, the Congress President will address the Indian Overseas Congress in London.