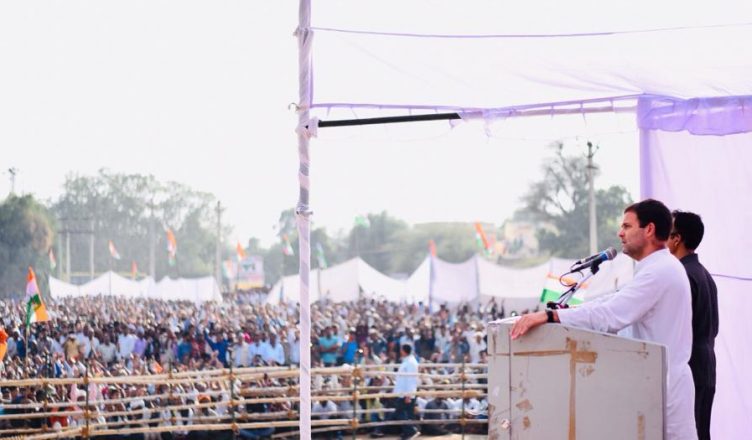 While slamming Prime Minister Narendra Modi for chanting ‘Bharat Mata ki Jai’ all the time but in actuality working for people like Nirav Modi, Mehul Choksi, Anil Ambani, Congress President Rahul Gandhi on Tuesday said that it is the farmers, youth, women and labourers who are our ‘Bharat Mata.’

“We will show Mr. Modi how to waive off farm loans in 10 days of forming the govt. That is the true meaning of ‘Bharat Mata ki Jai’. We should take care of those who built this nation,”  he added.

While addressing another public gathering in Rajasthan’s Jhunjhunu, the Congress Chief said, “We do not want to talk about our ‘Mann ki Baat’ like Mr. Modi and make a habit of listening to the ‘Mann ki Baat’ of people of Rajasthanthey do not want.”

The Gandhi scion said that India’s richest industrialists invested and marketed Mr. Modi and made him Prime Minister and now Mr. Modi is paying back their dues.

“When Congress forms the government, it will be a government of the farmers, women and youth,” he said.

“Loans worth ₹3,50,000Cr of India’s richest were waived off by Mr. Modi, but, not a single rupee of Jhunjhunu’s farmers’ loans were waived off. Aren’t the farmers included when Mr. Modi says ‘Bharat Mata ki Jai’?” the Gandhi scion questioned.

“If Mr. Modi and CM Vasundhara Raje had created jobs, why did 4 young men commit suicide due to unemployment? Did they apologise to the youth?” he further said.

Gandhi will next address a gathering in Udaipur.