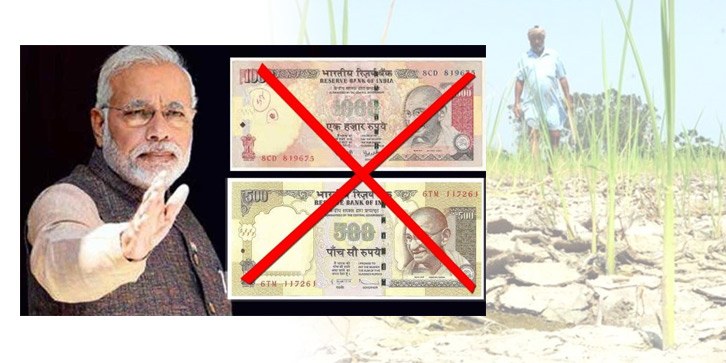 When Modi announced the demonic demonetisation on November 8, he asked for only 50 days to bring things back to track. Also, he kept on ranting that the move was aimed towards the betterment of the common man. However, the after effects of demonetisation were disastrous and struck the masses hard, especially the farmers.

Today, across the country, from Madhya Pradesh, to Maharashtra, to Tamil Nadu and Haryana, the crisis in India’s agrarian economy is severe, owing majority of it to demonetisation. And it is fast-spreading.

In Mandsaur, Madhya Pradesh, protesting farmers clashed with police forces and in the ensuing violence 6 farmers were killed as the police resorted to opening fire on them. Next door in Maharashtra, there were reports of wholesale markets shutting down and farmers throwing their produce out onto the streets because of the glut.

Similarly, the image of farmers from Tamil Nadu, a state that is in the throes of severe drought, protesting in New Delhi has become a media sensation. With shaved heads, carrying skulls and holding dead rats in their mouths, the farmers demanded that some sort of response from the government be shown towards their plight.

As a direct result of demonetisation, for instance, tomato and onion farmers were deeply affected as prices fell by 60- 85%. The shortage of cash subsequently went on to affect other agricultural commodities, de-stabilising agricultural markets across the country and prompting fire sales.

The RBI acknowledged the same, admitting in June that “Incoming data suggest that the transitory effects of demonetisation have lingered on in price formations relating to salient food items, entangled with excess supply conditions with respect of fruits and vegetables, pulses and cereals”.

The crisis has led more farmers in India to turn towards sources of credit and has conversely increased the number of indebted farmers in the country where on average, roughly 52% of the country’s farmers have some form of debt.

Debt in turn is a well established and documented cause for farmer suicides, a situation which the country has struggled to solve. Farmer suicides in 2015 registered 8,007 cases, an increase by a significant 41% from the previous year.

All the distressed farmers want is government’s attention towards their plight, but this government appears to be happily flying blind.