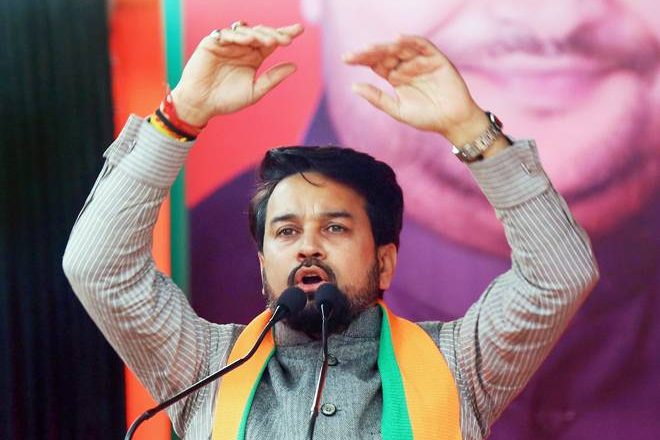 The Election Commission (EC) has ordered the removal of two senior BJP leaders, Union Minister Anurag Thakur and Lok Sabha member Parvesh Singh Sahib, from its list of star campaigners for Delhi assembly elections. The action was taken by the EC as it believes that the comments made by them were prima facie violative of the Model Code of Conduct (MCC). The EC believes that the two BJP leaders “have the potential of disturbing communal harmony and aggravating existing social and religious communities.”

West Delhi BJP MP, Parvesh Sahib Singh, on Tuesday made obscene remarks about the anti-CAA and NRC protests at Shaheen Bagh. He claimed that if it continues, Delhi will see themselves in a “Kashmir-like situation” where protesters will “enter homes and rape sisters and daughters.” He also said that if BJP came to power in Delhi, they will ensure that all the protesters of Shaheen Bagh are removed from the area. Moreover, he also promised to demolish all mosques on government land in his constituency, if voted to power.

EC sent the order of the two BJP leaders removal and demanded that it be done with “immediate effect and until further orders.” It’s action comes one day after it sent a show cause notice to Thakur and Singh regarding their comments and actions where they were asked to reply by Thursday noon.

For all elections, whether they’re on the national or state level, political parties must send the EC a list of its star campaigners, which are generally prominent political leaders or faces that the public already knows. A recognized national or state party have the option of sending a list of 40 star campaigners, while a registered unrecognized party can have a maximum of 20.

One of the most important perks of being a star campaigner is that their travel expenses will not be included in the election expense accounts of candidates of their party.