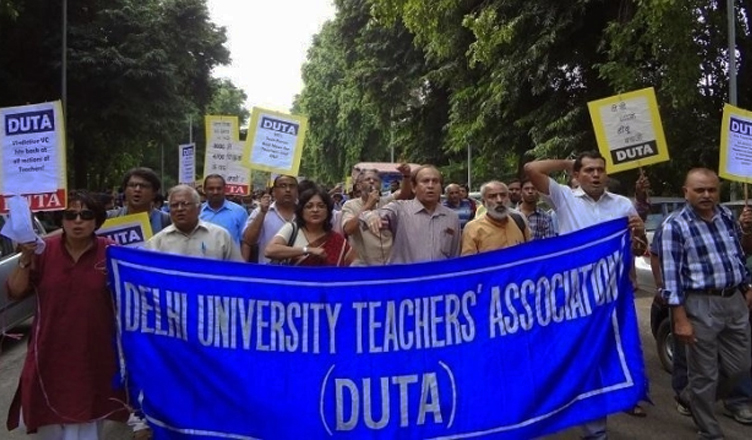 Delhi University Teachers’ Association (DUTA) has called for a shutdown on January 17 and 18 in support of 4,600 ad-hoc teachers, to demand them to be absorbed as permanent teachers.

Shutdown will be one-last attempt before teachers decide to march to Parliament during the budget session, which is likely to begin from January 31.

“Ad-hoc teachers are treated like slaves, with no security, no leave, no benefits and yet they are expected to engage classes, publish papers and conduct research work like any other ‘permanent’ teacher,” National Herald quoted former DUTA president Dr. Aditya Narayan as saying.

“The situation is so bad that if an ad-hoc teacher gives birth to a baby, she is still expected to engage classes or go without salary. The problem is that this Government is trying to apply the Gujarat model of education to the rest of the country—effectively handing over higher education to private players,” he added.

“Their workload is as heavy and they are required to work under constant uncertainty over their tenure—this constant fear of losing their job is unfair and it is unreasonable to expect them to give their best,” National Herald quoted Dr John, Secretary of the Staff Association at Jesus & Mary College, as saying.