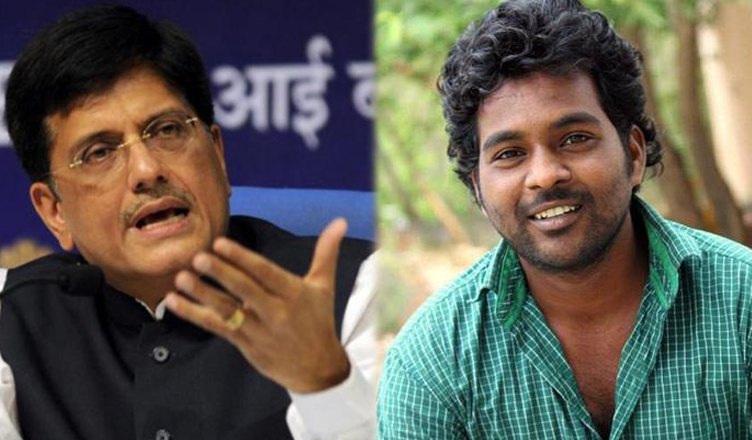 Since the Bharatiya Janata Party (BJP) has pulled out of the alliance with the Peoples Democratic Party (PDP) in Jammu and Kashmir, it has to divert attention from the issue in order to save itself from questioning and criticism. In such a scenario, the saffron party is resorting to what it does best, targeting Congress and its president, Rahul Gandhi.

Accusing the Indian Union Muslim League (IUML) of offering Rs. 20 lakh to Rohith Vemula’s mother for speaking ill about the BJP, Goyal very conveniently, pinned the blame on Rahul Gandhi, who has no connection to the incident.

First of, Rs. 20 lakhs were offered by the IUML, which has no association with the Congress Party in any capacity. The money was offered to Vemula’s family for building a house. However, after two cheques of Rs. 2.5 lakh each bounced, Vemula’s mother said that she felt she had been deceived. However, she realised that this was not the case when she came to know that the cheque did not bounce but as returned due to a spelling error.

Soon after Piyush Goyal press conference ended, Vemula’s mother hit back at the BJP denying all the charges levelled by the saffron party. She denied being used for political gain and categorically stated that she has the right to speak against anyone she wants to.

It’s common knowledge that facts have never stopped the BJP from spewing verbal attacks against its biggest opposition, the Congress party. These attacks don’t have to be corroborated, fact check or even true, they simply have to achieve two goals – Attack the Congress & distract the public from the government’s latest debacle.

Piyush Goyal’s statements are nothing but a diversionary tactic to distract people from focussing on the troubled state of Jammu and Kashmir. The timing is definitely conspicuous.

It is unfortunate that instead of focussing on issues such as unemployment, agrarian crisis, fuel prices etc which are hurting the people, the BJP government is busy trying to malign the Congress and its leaders.