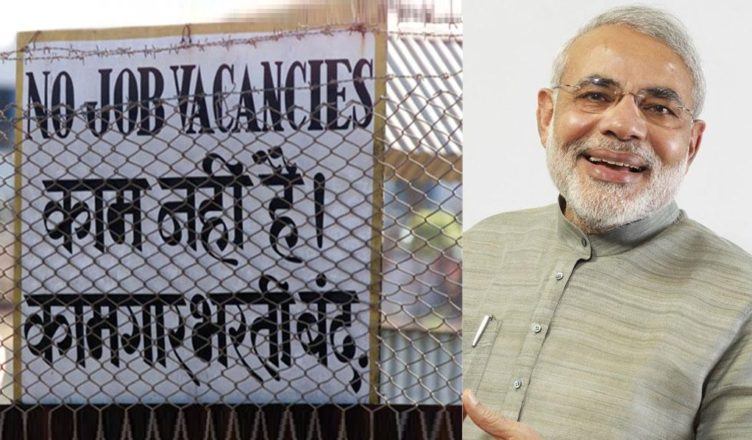 According to Labour Bureau Data provided by the Ministry of Labour and Employment, employment generated under various national schemes, fell sharply soon after demonetisation was announced in November 2016. The data was provided in the Lok Sabha in response to various questions on the impact of demonetisation and GST on employment.

According to the data, employment generation under the Prime Minister’s Employment Generation Programme (PMEGP) fell sharply from 4,07,840 people getting jobs in 2016-17 to just 2,08,576 getting employed in the first three quarters of 2017-18. Similarly, the person-days generated under Mahatma Gandhi National Rural Employment Guarantee Scheme (MGNREGS) dropped drastically from 23,583 lakh person-days generated in 2016-17 to just 16,029 from April-December 11, 2017.

The manufacturing sector was hit hard with 87,000 job loss in the first quarter of 2017-18. The transport sector also saw a fall of 3,000 due to demonetisation. The Modi Government should be ashamed of ruining the lives of the common man by committing two blunders namely, demonetisation and GST. While the big fishes are having the best time of their lives, the innocent small fishes are struggling and trying to make their ends meet.

BJP and PM Modi together have literally closed all the options possible for survival of the common man. It is not wrong when people out there curse PM Modi and his government. They are responsible for making their lives absolutely difficult. No doubt, it is a #SuitBootSarkar, which is only interested in making their capitalist friends’ lives better and being apathetic towards the poor, farmer and common man.